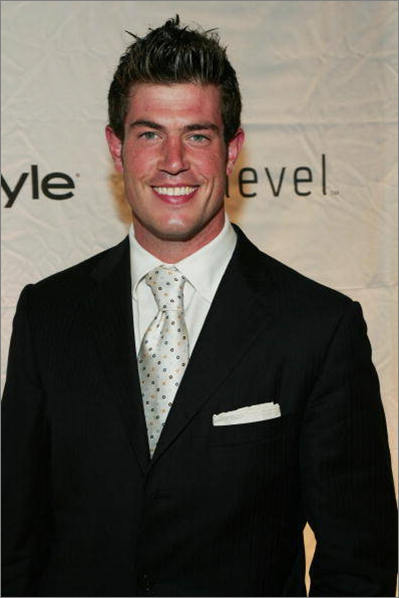 Jesse Palmer (birth name Jesse James Palmer), born on October 5, 1978 (age 35),  is a Canadian sports commentator and former college and professional football player. His birthplace is Toronto, Ontario, and raised in the city of Nepean, Ontario, a suburb of Ottawa.

He was born to Bill Palmer and Sushan Palmer. His father, Bill Palmer, played for the Ottawa Rough Riders. His mother, Susan Palmer, was a prominent fashion and print model, and former owner of the original ITM International Top Models, a modeling agency and training center located in Ottawa.

He received an athletic scholarship to attend the University of Florida in Gainesville, Florida, where he played for Coach Steve Spurrier’s Florida Gators football team (1997 – 2000).  Palmer graduated from the University of Florida in 2001 with two undergraduate degrees: a Bachelor of Arts in political science from the College of Liberal Arts and Sciences, and a bachelor of science in marketing from the College of Business Administration.

After completing of his college, he played professionally for the New York Giants of the NFL before spending half of the 2006 season with the Montreal Alouettes of the Canadian Football League (CFL).

Palmer was chosen by the New York Giants in the fourth round (125th overall pick) of the 2001 NFL Draft, and he played for the Giants for four seasons from 2001 to 2004. After a four-year stint as a backup quarterback, Palmer was cut on September 2, 2005, by the Giants. Then he looked for Canadian Football League for employment.

He expressed interest in playing for his hometown. Palmer’s agent reportedly asked for a three-year contract in the neighborhood of $660,000 per year, which would have made Jesse the highest salary paid player in the league.  He retired from the CFL before the start of the 2007 season to pursue a broadcasting career.

Palmer was cast in 2004 as the bachelor on the fifth season of the reality television series The Bachelor and made himself the first non-American bachelor, in which he was given his choice of eligible single women.

This talented guy had a successful broadcasting career also. He was a color commentator for Fox for two games late in the 2005 season and returned to the booth on November 26, 2006. Palmer works for ESPN as a studio analyst on College Football Live and ABC telecasts. ESPN named Palmer and Brent Musburger as the lead game announcers for the forthcoming SEC Network on March 12, 2014.

Palmer is also a New York correspondent for CTV’s entertainment news program, talk, covering both sports and entertainment events, which include the Super Bowl and the 79th and80th Academy Awards.

Jesse Palmer is a multi-talented personality. This handsome hunk is 6′ 2″ tall (1.88 m) and weighs approx. 225 lbs. (102.1 kg) and appeared in different trendy haircuts. His eye color is blue and his hair color is brown-dark. His shirtless pictures can be found on the net.  Jesse has admitted to having a lot of girlfriends from all walks of life but he is not married.

His status is single but he is not gay. Palmer’s personal life has been kept out of the spotlight. He does not talk much about his private life. In talks of relationships and marriage, Jesse had hinted that he is married to his job only. So his current wife is his work. As of 2012, Palmer is estimated to be worth $4 million.

More info regarding his biography, career, etc. can be found on the wiki, IMDb, etc.  He is on social networking sites such as Twitter, Facebook, etc.