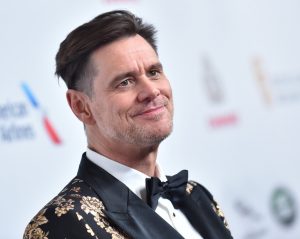 Mostly known for his flexible body movements and weird facial expression, Jim Carrey is one of the role model in the Hollywood Comedy history. He has played in many movies often taking up the roles of characters who lacks manners. He has altogether won 2 Golden Globe Awards and other prestigious awards.

He had to drop from the high school to support his family. As his father lost his job, he was the only one to help his family as well as care his sick mother. In the years, when he tried to get a good job to sustain his family, his father tried to give him the platform for the comedy. But because of their poor economic condition, they were not able to fulfill it. After sustaining from the economic crisis, he started to make his dream come true.

He started to get small roles in the movies as well. He has worked in many movies in a comedian role. But his first leading role was from the movie “Ace Ventura: Pet Detective”. From this movie, he was internationally acclaimed as well as this movie was hit in the box office. In the same year, he appeared in The Mask and The Dumb and Dumber. From the movie “The Mask”, he was highly praised and many believed that one of the comedian star is born. He became the synonym for the box office success.

In 1997, he appeared in the movie “Liar Liar”. His acting was highly appreciated by the critics as well as the audiences. He also got nominated for the Best Actor in Golden Globe Award.

Later in 1998, he was starred in “The Trueman Show” from which he garnered a Golden Globe Award for the Best Actor. His acting was highly acclaimed in 1990s and 2000s. In 2000, he came up with yet another recognized movie “How the Grinch Stole Christmas”. From the movie “Bruce Almighty”, he again got international success. He appeared in the different role in “Eternal Sunshine of the Spotless Mind”. From this movie, he showed that he is better in acting any roles possible. He was nominated for the Best Actor in BAFTA Award and Golden Globe Award. He is currently working for “Dumb and Dumber To” which will be released in November, 2014.

Regarding his height, he is 6 feet 2 inch tall. His married life has not been a success. He was married to Melissa Womer in 1987. The couple had also got a daughter in the name of children. The couple divorced in 1995. In 1996, Lauren Holly became his wife. But their relationship did not last more than 1 year.  He had been involved in many relationships after that. He had an affair with many co-stars. Some of his girlfriend’s includes Laurie Holden, Anine Bing and January Jones. He also has short run romance with Renee Zellweger to whom he started dating from 1999. Many believe that because of his gay disposition, his married life has not been a success.

He has the dual citizenship of both USA and France. Because of his standup comedy, he is still popular among the youngsters despite he has crossed the age of 50. He has the net worth of $150 million. He is the actor who should be included in the Oscar winners. But unfortunately, he has not yet succeeded in it. His shirtless pictures had also been viral once. He has given us the best films which we cannot forget all our lives.