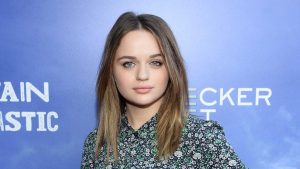 Joey King is an American teen actor born on July 30, 1999 in Los Angeles, California, U.S. King became popular among people after starring in the Ramona Beezus as a main character Ramona Quimby. This movie was the 2010 adaptation of Beverly Cleary’s book series with the same title. She has two elder sisters named Hunter king and Kelli King, who are also actresses.

King started her career by appearing in the TV commercial. She has done over 104 commercials including commercials for Eggo and Walmart. At the young age of six, she appeared in her first film named “Grace”. She was also featured in the movies Reign Over Me along with Adam Sandler and Quarantine. She also guest starred in the series Ghost Whisperers in the year 2010.  Her voice was also featured in the animated feature Horton Hears A Who! In 2008 and for Ice age: Dawn of Dinosaurs in 2009. King portrayed the role of Emily Mason in The Suite Life of Zack & Cody.

joey king ramona and beezus raise her to more fame as she has done the first lead role in this movie. She played the role of Ramona Quimby and acted opposite Selena Gomez as her older sister, Beezus Quimby. King was also seen in the Taylor Swift’s music video titled “Mean” , appearing as the a young student at the school cafeteria rejected by her peers. Besides her acting career, King has also sung many songs including “Ramona Blue” for her movie Ramona and Beezus. She played the character of Kirsten in the movie Battle:Los Angeles and in the year 2012, appeared in the movie Crazy, Stupid, Love.

Joey appeared as a young Talia al Ghul in the third Batman movie, The Dark Knight Rises in 2012. The same year, she appeared in other two movies named New Girl and Family Weekend. In 2013, King appeared in four movies: as a China Girl in Oz the Great and Powerful, as Christine in the horror movie The Conjuring, as Emily Cale in White House Down and as Carla in R.L. Stine’s The Haunting Hour. She has already starred with many famous actors including Selana Gomez, James Franco, Channing Tatum, Zach Braff, Jamie Foxx, Mackenzie Foy and Vera Farmiga. She has also voiced the character Jessie in the movie The Boxcar Children which is in post-production. Her upcoming movie name is Grace Bloom.

King has an attractive and naturally beautiful face. She also has an appealing personality and cute smile. King has a sexy body structure with a beautiful pair of long and slender legs. Her height is 4 feet 11 inches tall. Her pictures are also available in various internet sites. She has a sweet style of talking. You can also check out her interview in You Tube.

Regarding her personal life, she has just reached 14 years old. She has announced herself that she is a part Christian and a part Jewish. She is young and does not have any affairs and boyfriend.