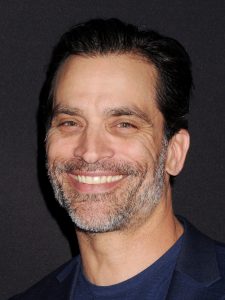 Johnathon Schaech is an American writer, actor, producer and director who was born in September 10, 1969 in Edgewood, Maryland. He is of German and Italian descent and was raised by Roman Catholic.

He started his career from 1993 and today also, he is actively involved in this field. In Hank’s debut in writing and directing in 1995, Schaech was taken for the role of self-absorbed and ambitious lead singer in “That Thing You Do!”. From this movie, he got a positive review. Because of this, he was offered by many different movies for various characters. Schaech took the male lead role in the thriller movie Hush in 1998. Other than his serious acting, he also appeared in the comedy role in “Welcome to Woop Woop” he was in the independent feature Woundings in 1998 where he played the role of a military man.

He has also appeared in different TV movies. He is the cast member of Blood Crime and Suzanne’s Diary for Nicholas. In 2001, he became the regular cast member of “Party of Five” where he played opposite to Jennifer Love Hewitt. Schaech has also worked for ABC where he played the title character feature Judas of Tom Fontana. Many viewers have enjoyed his acting in Prom Night, Quarantine and in Takers.

There has been rumor that he is a gay. But he proved it wrong as he was married to Christina Applegate who is also an actress in 2001. Their relationship lasted for 5 years. They filed a divorce in December 2005. In 2008, he began dating with Jana Kramer who is also an actress and singer and got engaged in 2009. Their wedding took place in July 4, 2010 in Michigan. But unfortunately, their relationship only lasted for one month. After that, Julie Solomon became her girlfriend. He married his 3rd wife, Julie Solomon, a book and music publicist, in 2013. In the name of children, they have one son who was born in September of 2013. Hope, this relationship will last long!!!

In his career, he has played more than 50 movies. Most of them have been successful as well. The movies in which he took the lead role have been recognized as the unique movies internationally. Some of his successful movies are Laid To Rest, Phantom, Ray Donovan, Hercules: The Legend Begins, The Prince and Angels Fall. Currently, he is engaged in “Vice” which is releasing in 2015.

Schaech is a tall guy with the height of 5 feet 11 inch. He was once a fashion model. He was also appeared in Jay- Z’s new music video where he is playing a US Marshall. He is a fan of Ravens and Orioles. He supports Talk About Curing Autism (TACA). He has reached the age of 45 from 2014.

He is actively involved in social sites as well. He is present in Facebook where he continuously post. He is also popular in twitter and has large number of fan followers.  He is the guy who loves to act in different ways so that he can improve his skills. Because of this reason, he has been successful in his career as well. He has the net worth of $15 million. He is also actively involved in various social works. He has commented that since acting is his passion, he will not leave this field until his death.