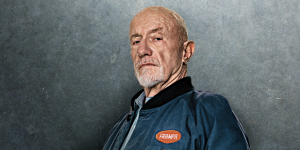 “I’ve died so many times. I’m 65. On my 40th birthday, my girlfriend gave me a reel with ways I had died, whether it was by knife, or electrocution or drowning or being thrown off a building or whatever it might have been. I’ve died a lot of times!”

Jonathan Ray Banks was born in 31st of January, 1947 in Washington D.C. He is a popular actor in Hollywood who is best known for his role in “Beverly Hills Cop”. He has actively involved in this field from 1974 and he is still working passionately. He has always loved the acting and has made it as a passion from his early age.

He is a graduate student of Indiana University. In his student life as well, he worked on the production of The Threepenny Opera. He made the performance in 1974 in Los Angeles in 1974 which became his life changing moment. He got chance in the movies in 1976 and the TV shows as well in the same year. He made his debut in the TV series from “Barnaby Jones”. He has played more than 50 TV shows altogether and has got much praise from his acting capabilities.

His TV series have given him a lot of successes which has also helped him to prosper and heightened his popularity. Some of his successful TV series are “Dexter”, “Day Break”, “CSI: Crime Scene Investigation”, “Breaking Bad”, “Axe Cop”, “Wiseguy” and “Falcon Crest”. He is currently working in “Better Call Saul” where he has played the role of Mike Ehrmantraut.

Besides his acting in the TV series, he has appeared in many movies as well. He made his debut in the movies from “The Macahans” in 1976. He has played various roles in more than 30 movies till now. Some of his latest movies are “Airplane”, “Proud American”, “Watercolor Postcards”, “Identity Thief”, “Bullet” and “Horrible Bosses 2”. He is currently working on “Term Life” which will be released in 2015.

From his hard work in this field, he has won many prestigious awards as well. He has won the Saturn Awards for the Best Supporting Actor on Television from “Breaking Bad” in 2013. Moreover, he was nominated in many awards such as Critics’ Choice Television Awards, Primetime Emmy Awards and Saturn Actors Guild Awards from this same series.

He has visited many places around the world in his childhood as his parent was the CIA agent. He is a tall guy with the height of 5 feet 8 inch and has the weight of 68 kg. In case of marriage, he has married thrice. He got married to Marnie Fausch in 1968 but their relation lasted only for 2 years. They got divorced in 1970. In 1990, he got married to Gennera Banks and they are still together and living a happy life. He is popular in the social sites as well. He has got large number of followers in all sites such as twitter, Instagram and Facebook. He is known as one of the richest celebrities with the net worth of $124 million.

Do not confuse him with the young boxer whose name is also the same. Banks’ pictures are also available in the web. His movies as well as TV shows can be watched in YouTube. His full biography is also available in Wikipedia and IMDB. If you want to know about any celebs, you can always remember us.