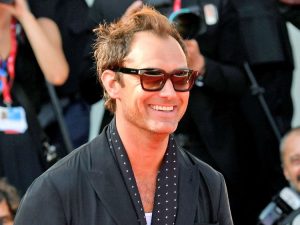 An English actor, Producer and Director, Jude Law (birth name David Jude Heyworth) was born in 29th December, 1972 in Lewisham, London, UK. Law is considered to be the prominent celebrity in the Hollywood industry, his versatile talents that contribute his works range from different professions from an actor to being a producer and director. During his wonderful career in the Hollywood industry, he was able to grab several honorary awards and nominations which include BAFTA, Academy award, Empire award and many more. He began to pull the attention of the public from his outstanding roles both in the movies and tv shows. Throughout his entire career, it is believed that he is estimated to have a net worth of $45 million dollars.

Although, Law was born in Lewisham but his entire childhood was spent in Blackheath. Born as the second child of the headmaster, his family nurtured him with good education, values and dignity.  It is said that in those time his father was fan of  legendary band ‘The Beatles’, his father got so much influenced from the song title ‘Hey Jude’, he kept his son name the same Jude, so,  at early age Law’s name is kept and derived from the song title.

Young Law initiated his acting training from the National Youth Music Theatre; it was just golden platform for him to enter in Hollywood industry. He then made his debut television role in 1989 and subsequently began to participate actively in different roles and drama. He owns very artistic and theatrical characteristics that he brought up from the Theatre. It was admired from the roles that he portrayed was so distinct in his character while representing his act. Besides acting he also pursued in other commercial and social projects such as advertising, Realtime Movie, charity activities, and Peace activities. He even joined hand in hand on the protest of Belarusian democracy movement against Alexander Lukashenko. Law always wanted to be the part of the society not beyond the society so, because of his initiation in the revolution foster an icon as a freedom fighter.

Regarding his personal life, he had a very controversial life. While working on the movie ‘Shopping’, he had an affair with Sadie Frost, who an actress was working for the same movie; it was so intense relationship that they decide to get married. Soon after he became a father of her three children. However, the relationship didn’t long last soon his wife filed for divorce in the court and they got divorced.  Similarly, while working on the movie Alfie, he began to go for dating with Sienna Miller and consequently, they got engaged. But, the interesting part was when Law announced that he had affair with nanny of his children. Soon, it ruined the relationship with Sienna Miller and they got separated. Again, he began to have affair with the model Samantha Burke and soon he was a father of his fourth child. Recently, he made secret affair with his new girlfriend Catherine Harding and they are expecting the fifth child.

So, talking about his personal stuff, he is not gay but he is really a seductive celebrity it is really insane to describe how person can have several relationship with numerous person. But, his fame reflects on his perfect body and his great looks with tall figure. He has an average height of 5 feet and 11 inches which is about 1.82 m and he also normal weight which is about 75 kg.

He makes sure that he is in touch with his fans through social networking sites, often seen in Facebook, twitter and Instagram. For the information about his biography and other personal stuffs, you get to know more about him in the wiki and IMDb.