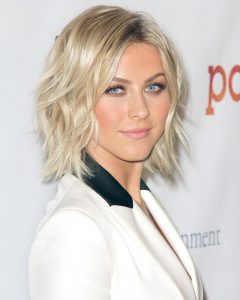 American professional dancer, music singer and actress Julianne Hough was born on July 20, 1988. She is queen of dancing; she is champion of ABC dancing with the stars. She is multi-talented person who is best in dancing, singing as well as acting. She was the youngest of five children her mother name was Marianne and her father name was Bruce Hough.

She has got lots of inspiration from her parents. Her family was too cute; her brother was also a profession dancer. Her four Hough grandparents were dancer, so she was also good at dancing because her whole family was good dancer.

Hough began dancing at 9 she went to training at Center Stage Performing Arts Studio in Orem, from where her dancing career started her dance with Josh Murillo. Her parents get divorce and they send Hough and his brother to London to live study. They both received training in singing, dancing ballet and tap. They perform dance compition in USA and UK and different Television shows in UK.

After that she became a good dancer, she was one of the millions dollars dancer she won the four season of US in dancing with stars were she got gold-medal, she was the young professional dancer who win the four season.

She again went to five seasons she wins that also and she went to six seasons, but at seven seasons she felt abdominal pains. After those abdominal pains she returned to the shows she told that to Ryan Seacrest and she again went to seasons eight and she dance with Footloose and as well as her brother and after that she again came back to shows to promote her film Rock of the Ages.

As she was a good dancer, she was also a good singer her first music single was ‘Will You Dance with me’. She was debuted as no 1 singer, she again perform her second music single with dancing with the stars as well as his brothers.

She was nominated for top new vocalist award, a fan voted award and she won it. As she is good singer as well as dancer she was leading towards film career due to her well performance. She also work with wardrobe malfunction who is the good singer.

Hough was very hardworking person, she did lots of struggle in her life her first acting role was in 2001 with Harry Potter she appeared role as a school girl and her acting was too good after that she did lots of progress in film sectors again she appeared in Burlesque in 2010 were she did role of small town girl who did lots of success in that film.

Hough is one of the beautiful girls she is a good dancer and anyone who could be her boyfriend could be a luckiest person in his life, there is lots of affair of Hough, she has dated different person in her life. She went to dating with Ryan Seacrest from April 2010 to March 2013 again in February 2014 she went to dating with NHL. She is too hot and sexy so any clothes feet her well.

She looks sexy in bikini. As her legs are too long so shorts dress looks too hot for her. She does lots of dieting for maintaining her figure, she do lots of diet for maintain her figure, her body measurements size is 32-23-34 and her body weight is 53 kg and her body shape is banana and her eyes color is pale blue  and her height is only 5-3 inches which is not too tall for the actress. Hough has the characters of multitalented; she is singer, dancer as well as actress.