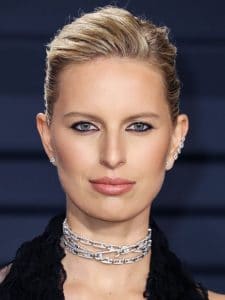 “Former Victoria Secret Angel Karolina KurKova is a Czech supermodel/actress known for her perfect proportions of body and face as well as for her energy levels during run ways walk and photo shoots. Appearing in the cover of Vogue for so many years and many other reputed magazines plus doing plentiful of runways and signing contract with many famous print campaigns, she has established herself as a top model now.

The veteran model married her finance Archie Dury in 2009 after revealing her pregnancy in the same year. But the American media was already speculating that she was pregnant from her future husband Archie even before her revelation. The couple sweet son sweet name is Tobin Jack Dury. It is good to see, even after being a mother of a child, she has got a load amount of modeling projects like she used to get when she was unmarried.

The credit goes to her perfect training routines and diet plans.”

An analysis on her looks and physical appearances

In fact, she is a natural beauty. She looks good even without a makeup and she has always been slender and fit. But in 2008, fashion critics criticize the supermodel for looking too fat in a bikini. During a Cia Maritime Runway then, Brazilian media criticizes her for having what they called´” having “too much back fat, love handles and cellulite.”  The reason for this type of unusual increase of her weight was a disease called hypothyroidism.

Kurkova, who always exercises and consumes healthy foods, after suffering from the disease in 2008 gets panic attacks and ultimately suffers from the symptoms of premature menopause and gains 30 pounds. Later, to cure the disease, she goes through a surgery and hypothyroidism treatment programs.   Moreover, because of a surgery she had as an infant, she also has a smooth indentation in place of a naval and it is true that, often her photographs are always altered by the addition of a picture of a bellybutton to hide the indentation.

Because of the surgery, her umbilical hernia was removed. We think, even with no belly button, she looks equally sexy in comparison to other legendary top super model like  Gisele Bundchen and Heidi Klum.  I mean, look at her now, she is more fit than her past years plus she has expanded her profession to acting and business.

It seems like there is no stopping the 30 years old of age gorgeous Karolina. LR Health & Beauty Systems, her own fragrance corporation, has been tremendously popular since its establishment in 2013. Leggy beauty, Karolina with an impressive height of 5 feet and 11 inches plus her fun personality and golden blonde hair, is regarded as one of the most beautiful women of the world. Her impressive body measurements of 33-24.5-34 inches are also compliments her easy-going fun personality. Her tall height has given her an impressive pair of legs which are really very much attractive.

She is very much professional as well. Remember that incident, when one of her high-heels comes off in a runway show? If you remember, just imagine how professionally she acted by walking like nothing happened and all smiling. 2004’s People magazine “50 most beautiful people”, Adriana made her film début from My Sexiest Year in 2007.

She also has played in the reputed movie G.I. Joe: The Rise of Cobra. Moreover, she has appeared as judge on various reputed television shows like America’s Next Top Model, Germany Next Top Model, 2008’s Academy of Country Music Awards as presenter. Moreover she is also a supermodel head coach of OXYGEN’S “The Face”. It is

no surprise Vouge editor Anna Wintour called her the “next supermodel” when she was in her teen days modeling. Because of her dedication and hard work she was bound to be successful. If you are her fan, i shouldn’t tell you where to find her hot pictures and even if you don’t know just type her name in Google.