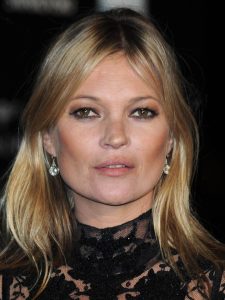 On July 1, 2011, Supermodel Kate moss and Jamie hince tied knot in the St. Peter’s church, Cotswold, England. The bride and the Broom looked happier ever as they posed for the cameras outside the St. Peter’s church. The couple had exchanged simple gold bands, as Kate wore with her diamond engagement ring.

The diamond engagement ring of Kate moss is a copy of the art deco style inspired from Mrs. Zelda Fitzgerald engagement ring given by her husband F. Scott Fitzgerald who was an American novelist.  Zelda’s engagement ring was the 1920’s icon, very popular in those times. Very antique look of that ring with elegant and royal appearance had made this engagement ring one of the specialties of the Kate’s wedding ceremony. The ring costs around 80,000 dollars. The author F.Scott Fitzgerald is also one of Kate’s  favorite whose book she based her party around in her 30th birthday.

The ring with a story behind it had created yet another story of exotic wedding of hot model Kate with rocky Jamie hince.

Similarly, it can be viewed from Wikipedia. Her new autobiography which has been written by Chris Roberts has publicly inaugurated just in time of her 40th birthday as well recently. Roberts compiled the biography with Kate’s old media coverage, interviews, statements of her few close people such as Bryan ferry, a roxy music singer. But, Roberts himself personally has never ever met Kate. Average build slim Kate moss has an amazing height of 5 feet 7 inches tall and she is best known for modeling, and a role model & inspiration for many girls, new comers’ models and actresses.

Iconic model of all time Kate has included in the covers of more than 300 magazines in her 25 years’ career.

So much popular her fashion statements to the world of stage, her beautiful inspiring quotes are also popular along with her day to day modeling and walking the ramp. From her quotes, we could learn something from it, and she thinks that her mouth is her best feature.

She could use Twitter to do this but she doesn’t like online social media that they know of everything what she is doing, though she has an Instagram account protected. She wants the news of every details of her not public, and that’s what making mysterious, she told. She was really mysterious that one time she was in drug scandal but even from that publicity, though bad, made out pretty huge income.

Yet another one thing which is a flaw to her beauty can be her teeth. 20 years of smoking, partying and drinking have really made it worse to her beauty now and then. She finds herself very difficult to get rid of her smoking habits. Heavy smoking may even suffer from her not having another successful pregnancy too.

To combat this chain smoking, it was reported to have being used hypnotherapy as well by her. She has been blowing up electronic cigarettes instead of it which cost her around 2000 pounds per packets. She has been on proper health check up and diet. She was pregnant for the first time in 2002. She turns 40 on this January 2014. Good luck for her!!