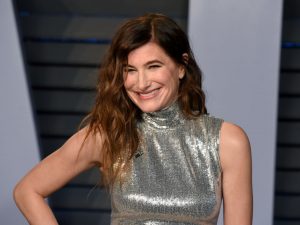 “NBC and Tim Kring took a huge leap of faith in casting me. To be worked into a show that was in production and on the schedule, is an amazing stroke of luck”.

Katherine Hahn was born on July 23, 1973, in Westchester, Illinois. She is an American actress who is best known for her role as “Lily Lebowsky” in TV series Crossing Jordan. She has the passion in acting from her early childhood.

So, she obtained a bachelor’s degree in theatre from Northwestern University and has also attended Yale School of Drama.

She started her career in the puppet show for children in “Hickory Hideout”. During the theatre festival, the NBC casting director introduced her to the creator as well as the producer Tim Kring. For her, he created the role of Lily Lebowsky in “Crossing Jordan.” she has also0 appeared in different roles in various movies. She made her debut in the movie in 1999 the movie Flush. Because of the well review from the critics in “Crossing Jordan”, she got a chance to play in many TV series as well as the movies.

Having the trade mark of over-the-top facial expression, she has certainly captivated the hearts of many viewers. She had an affair and seen dating with many celebrities in early 2000s. But she married with her boyfriend, Ethan Sandler, in 2002.

The couple has got 2 children, a boy and a girl. She became pregnant for the first time in 2006. Her second baby was born prematurely. Her pregnancy with her son, Leonard was also portrayed into the storyline of Crossing Jordan, with Sandler portraying the baby’s father.

Both her husband and Hahn love and trust each other. Because of this reason, there has not been any dispute between them till today. Hope, they always remain like this ad we would not hear about their divorce.

She loves to paint and practice yoga. When she is not busy in acting, she will be doing either of it. She currently lives in Los Angeles. She looks damn sexy with the body measurements of 36-26-36. She is 5 feet 5 inch tall.

Despite of being mother of 2 children, she has maintained her body well. Till today, her hot and sexy pictures are circulated on the web. She reached the age of 41 in 2014. During her career, she has earned a net worth of $2 million.

Though she has got the height of success from TV series, her acting in the movie “This Is Where I Leave You” was well received by the critics. In this movie, she has performed the role of Alice Foxman. Her latest projects involve “D- Train”, “Sundowning”, “Tomorrowland”, “Len and Company” and “She’s Funny That Way”. She is often mistaken for Ana Gasteyer, an SNL cast member who worked from 1996 to 2002. Many people have made comments about her as they believed that she is the cast member only.

As she is one of the successful TV actresses, she has always tried to improve her performances in different series. She said that viewers’ review is the most influencing factor of any actor.