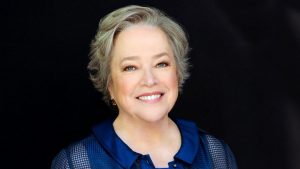 Well known American actress and film director Kathy bates was born in June 28, 1948 in Memphis, Tennessee. She is the youngest daughter of mechanical engineer Langdon Doyle bates and home maker Bertye Kathleen. Kathy was raised Methodist. bates is the graduate of White Station High School. After graduation, she attended Southern Methodist University and majored in theatre in order to achieve her dream.

After graduating in 1969, at the age of twenty one, she moved to New York City in order to pursue an acting career. She started her career in 1970s with the several minor roles in film and television. She is well known for her play night, opposite Anne Pitoniak. For her hard work and dedication in this play, she received a Tony Award nomination in 1983.

She was very much praised by her work in Fifth of July, Come Back to the Five and Dime and Jimmy Dean. She also has successful New York stage productions such as Frankie and Johnny in the Clair de Lune and Off Broadway. After many successful plays, she appeared in films and movies. Her first featured film was Taking Off; a Miloš Forman comedy released in 1971. She also has sung an original song “Even Horses Had Wings”.

Straight Time was her next featured film in 1978. in 1977, bates was seen in NBC’s soap opera The Doctors. She appeared in All My children from 1983 to 1984. Soon after that, she was seen as Evelyn Maddox on One Life to Live from 1984 to 1985. In 1990, she appeared in Dick Tracy as a stenographer. Soon, after she appeared in the films such as Summer Heat and The Morning. She also had a guest appearance in television shows such as L.A. Law.

In 1990, she appeared in thriller film Misery; based on a novel of Stephen King for which she received her first Academy Award nomination. In 1991, she appeared in movie Fried Green Tomatoes with Jessica Tandy. In 1995, she appeared in Dolores Claiborne where she played the title character. In 1997, she was seen in titanic as Molly Brown. Due to her outstanding contribution and dedications in this field, bates has received several nominations and awards. She also was nominated for an Emmy Award and oscar.

She also appeared in ten episodes of Six feet Under. In the same way, she appeared in many films, movies and television series. After diagnosis in 2003, she was found having breast cancer. She revealed it via twitter in September 2012. Sixty six year old Kathy bates was married to Tony Campisi in 1991. She had no good marital relation with her husband so she had a divorce with him in the year 1997. She hasn’t revealed about her children. She hasn’t revealed much about her personal life. She was and is very pretty since her young days.

She was very attractive and sexy with hot legs and feet. In spite of being a victim of cancer, she is able to maintain a good health with a balanced and notorious diet. She is physically sound who has good height and weight. She is 5 feet 3 inches tall. bates is one of the famous American actress who has huge number of fans and followers all around the world. She is also an inspiration to many of her admirers. Numerous searches on her are made in the internet which includes about schmidt, her age, hot club, achievements and biography.