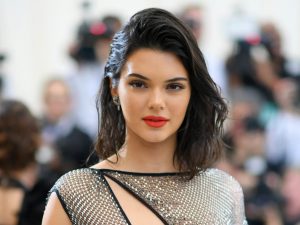 Kendall Nicole Jenner is an American socialite, a successful model, and a television personality. She is being featured on the E! reality show on TV with the Kardashians and her rest of the family. She has successfully modeled for the Sherri Hill dress line that specializes in proms and pageants’ dresses. She has also been featured in People magazines’ article of “Beautiful people.” She is also a ramp model and appears at several public events. She has walked her runway debut at Sherri Hill’s spring fashion show in 2012.

She has an amazing trade mark of her as “Towering height” as she is 5 feet and 10 ½ inches tall. She was born to parents Kris Jenner and Bruce Jenner, who was a former U.S Olympic gold medalist of decathlon, on Nov 3, 1995. She also has a sister Kylie Jenner, a model and out of four half-sister, Kim Kardashian as one of them who is a TV star, entrepreneur, fashion designer and an author of New York Times best seller. Jenner has schooling at Sierra canyon school where she was a cheerleader, but she studied at home in 2012-2013 school years. She also attended Yorkshire High school.

Kendall Jenner is now 19 years of age and on 18 years, she had a weight of 56 kg or 123.5 pounds. She might have maintained that at present as well. She has an ancestry of English, Irish, Scottish, and little of Dutch, French and German though she looks like Brazilian or Spanish. New style Ambassador for Seventeen Magazine, Kendall has opportunity to host events, for instance the Glee: The 3D concert movie and The Twilight Saga: Breaking Down- Part I red carpet event in LA with her sister style star 2011 Kylie Jenner. Both together have also hosted parties of fashion weeks. Similarly on Teen vogue, cover of Seventeen magazine September issue they were covering as featured issue. Ambassador Kendall has also been published her fashion diaries, and blog with her sister where she shows her favorite skin care products, makeup and her beauty tips and secrets.

At the moment, Kendall is trying to make most from her career in her youth. She has acted in TV series Hawaii five-O in 2012 which gives her most credential in her new acting career as well.

Regarding her dating and affairs, she recently broke up with her ex-boyfriend Harry styles and it was reported that it happened due to their busy working schedules. Kendall has been busy focusing on her modeling and Harry is preparing for his band’s fourth album and their stadium tour.

Before this, she had been dating with couple of her boyfriends; Julian Swirsky (2011), a friend of Justin Bieber who himself had arranged the date, but that didn’t turn out to be a strong relationship later on. Next one was Julian Brooks who was her high school sweetheart and was found cheating which ended her relationship with him as well.

Her days are of now spring time in her life; dark brown short hair, and similar color of eyes of white bright young aged lady can be a future super model and promising TV-star. Her body measurements of 34-24-34 inches wear bra size of 34B and shoe size of 10 (US). Her feet have rated as beautiful feet in wikifeet website as well. At her such a young age, many of her aged girls have been inspired from her that how much she has done; modeling, photo shoots, ramp and runway. She has been photographed by Russel James, many of girls dream photographer to photo shoot by him in their life. She has done so much for her age.  Television star and a fashion model Kendall Jenner have a net worth of $2 million. She is in the category of richest celebrities and models.

And, she has brand endorsements in Aqua Bendita, Sherri Hill, and Forever 21 besides Brand Ambassador of Seventeen Magazine.