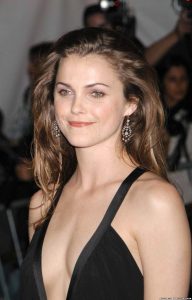 Well known American actress and dancer Keri Russell was born in March 23, 1976 to a homemaker Stephanie and a Nissan Motors executive, David Russell in Fountain Valley, California. She was born as a second child of her parents who has one older brother Todd, and a younger sister, Julie. She was raised in Coppell, Texas; Mesa, Arizona and Highlands Ranch, Colorado, as her father used to move frequently due to his employment. Russell was very talented and attractive since childhood. Since her early days, she had a keen interest in dancing and acting.

In order to achieve her dream, Russell joined many acting and dance classes. She first appeared in television at the age of fifteen in Disney Channelin All-New Mickey Mouse Club variety show as a cast member. From 1991 to 1994, she was in the show. Soon after she appeared in Honey, I Blew Up the Kid with Rick Moranis in 1992. Again in 1993, she appeared in Boy Meets World as Mr. Feeny’s niece. Then in 1995, she appeared in married… with children. Slowly she started to appear in several films and television series. In 1996, she appeared in The Babysitters Seduction; a made-for-television film. In the same year, she had a role in short-lived soap opera series Malibu Shores.

In 1994, she appeared in in Bon Jovi’s music video “Always” with Carla Gugino, Jack Noseworthy and Jason Wiles. She also appeared in two episodes of Roar alongside Heath Ledger in the year 1994. Then from 1998 to 2002 she starred on the successful WB Network series Felicity. For her role, she won Golden Globe in 1999. in the same time she appeared in Mad About Mambo, Eight Days a Week and The Curve. After this, she had a next role in 2002 in We Were Soldiers. After this, Russell moved to New York city where she made her stage debut in 2004 by appearing in Neil LaBute’s Fat Pig opposite to Andrew McCarthy, Ashlie Atkinson and Jeremy Piven. In 2005, she returned to film and television by appearing in The Magic of Ordinary Days, Into the West, Mission: Impossible III and The Upside of Anger. Russell was also chosen as a spokeswoman for Cover Girl Cosmetics in the summer of 2006. In November, 2007, she was seen in August Rush. In the same time, Russell was seen on the cover of the New York Post’s Page Six magazine. Later on she appeared in Bedtime Stories. On March 3, 2009, Russell voiced a direct-to-video animated feature Wonder Woman. In the meantime, she starred in Extraordinary Measures alongside Brendan Fraser and Harrison Ford. From 2010 to 2011, Russell starred in the Fox series Running Wilde. Since 2013, she appeared in The Americans.

Lady with beautiful short hair Russell was married to shane deary on February 14, 2007. After six years of marriage, the couple separated in the summer of 2013 and hence had a divorce. Russell has two children son River Russell Deary and daughter Willa Lou Deary. As Russell is found spending most of her time with Scott Speedman, there is a rumor of dating him. But Russell claims Speedman to be her close friend.

Russell is a popular American actress with attractive figure with 32-24-34 as her body measurements. She also has beautiful height and weight. She is 5 ft. 4 inches tall. sexy Russell has hot legs and feet who looks more sexy in bikini. Her fans can find more about her and her movies in wiki and her personal sites and also can tweet her in the twitter.