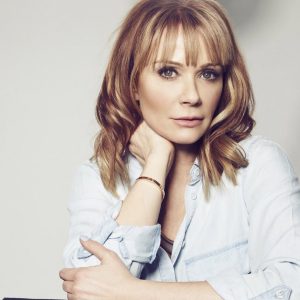 Lauren Holly (birth name Lauren Michael Holly) is well known American-Canadian actress who was born on October 28, 1963 in Bristol, Pennsylvania, U.S. Her outstanding roles in TV shows including her roles as Deputy Sheriff Maxine Stewart in ‘Picket Fences’ is widely recognized series that made her prominent star in the Hollywood industry.

Holly also made her presence in the movies including ‘Dumb and Dumber’ which was released in 1994 was thriving in the box office.

Holly is considered to be the most talented, awesome and brilliant actress who ruled Hollywood in late 90’s and she was like a media darling in the industry. Holly ethnicity is white and she also has dual American and Canadian citizenship as her professional career impart in both nations.

Her exceptional performance in her debut movie earned her to grab MTV Movie Award for Best Kiss. It was just a turning point in her life following the success of the movie since then she never thought to look back. During her entire career it is estimated that her net worth accounts to $14 million dollars from the start of her acting career.

The daughter of screenwriter and former professor at Hobart and William Smith Colleges, her early childhood age was spent mostly in Geneva, New York. Later on she graduated from Geneva High School, after ward she also hold an undergraduate degree in English from Sarah Lawrence College in New York.

In her family, she was born as an elder sister who has her two younger brothers. One of her brother Alexander who could not live longer, he died at the age of 14. So, during her early childhood age, she got the opportunity to face hard times bearing responsibility as in the position of elder and matured sister, quickly she learnt how to care and handle those extreme situations.

At the age of 20, she consistently began to pursue her acting career appearing in two episodes in Hill Street Blues TV shows where she perform a role of Carla Walicki. Following the entry in the media, she began to appear in numerous shows and movies including ‘All My Children’, ‘Archie: To Riverdale and Back Again’ etc.

Holly began to make her presence as main role in the movies including Field of Lost Shoes. Recently, she is busy shooting for the horror movie February along with the stars such as Emma Roberts, Evan Peters, Lucy Boynton, and James Remar.

51 years old Holly has given her half of her entire life serving for the Hollywood industry. Still, restless and relentless, Holly is working in the acting professionalism. Although, she has crossed adulthood age, she has managed to maintain her sexy body figure like in those days when she more beautiful and young.

Most probably to look alike as young and charming actress, many observers has speculated about her plastic surgery. Her body measurements comprises of 34 bust-23 waist-33 hips, body weight of 59 kg, and average height of 5 feet and 7 inches tall. Her pictures exposing her sex appeal can also be found out in the social networking sites such as Facebook, Twitter and Instagram.

Taking report on her personal life it seems to be very interesting since, she is now with her third husband with Francis Greco. She first married Danny Quinn and then her second marriage was with Jim Carrey.

Both relationships didn’t last long as she felt of not being with her life partner. Now, she is the mother of her three children and with her husband now lives primarily in Canada. It can be very helpful to know about her biography in other wiki sites like Wikipedia, and IMDb.