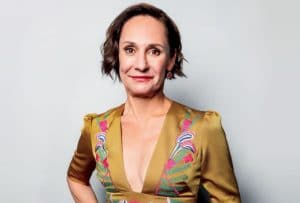 Three-time Emmy award winner Laurie Metcalf was born in Carbondale, Illinois, and brought up in Edwardsville, Illinois. She was the eldest one among three children of her parents James and Libby.

Her father was a budget director at Southern Illinois University-Edwardsville whereas her mother was a librarian. She says her to be very shy during her childhood days and never imagined being an actor in the future due to her unlikelihood.

Later on she had a true passion in theatre where she loved interpreting and studying human behavior.

She was very good at her studies since her school days. In the year 1976, at the age of 21, she attended Illinois State University where she obtained bachelors of Arts in theater. She also worked as a secretary during her college days.

Along with bachelors in art, she has also majored in German she began her career in acting after giving the audition for a few plays in high school then from Steppenwolf she began her professional career.

In the year 1995, she made her Broadway debut in My Things of love. In the twenty-minute Act Two monologue as Darlene; she was very much praised for her hard work and performance.

In June 2009, she was seen in a play named Voice Lessons and Brighton Beach Memoirs, and Broadway Bound respectively. In September 2010, she was seen in   Lisa D’ Amour’s play named Detroit. And again in 2011, she worked in Sharr White’s the other place.

Slowly she was featured in numerous films and televisions. She was featured in the movies like Treasure planet, toy story, Miles from home, stars and bars, Leaving Las Vegas, The secret life of the house, Blink, Meet the Robinsons, Mistress, Scream 2, etc.

After these, she was able to gain more success which rapidly increased the number of her fans. In spite of all these movies, she is best known for the role of Jackie in Roseanne.

After huge success and achievements, she was married to Jeff Perry in the year 1983. Her husband was the co-founding member of Steppenwolf Theatre Company. They have a daughter named Zoe (age 28). She didn’t have a good marital relationship with her husband so later in the year 1992; she had a divorce him.

Then she was again pregnant with her boyfriend Matt Roth’s child and eventually got married.  Again she gave birth to another baby daughter in the year 2005 via surrogate. This relation of her also couldn’t be stable so she again had a divorce.

Being a popular actress, she had numerous rumors against her. She was assumed to be either gay or lesbian during the shoot of Roseanne 58 years old actress who has good appurtenance with an attractive hot body including sexy legs and feet. She has a wonderful body measurements and height. She is 1.69 m tall. She is regarded as lady with beauty and brain.

Due to her talents, she has numerous fans throughout the world. She is followed by her fans through different social networking sites.