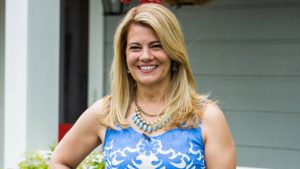 An American actress, songwriter, singer and author as well as a public speaker, Lisa Whelchel was born on May 29 1963 from her parents James and Virginia Whelchel. Her next name as Lisa Cauble, She is currently working with women of fate organization and it’s a Christian church organization where she is  regular speaker and she is active since 1977 up to now.

She’s famous for her work as a Mouseketer on a new Mickey Mouse club and as a wealthy Blair Warner on the facts of life.  She’s now the age of 50 was born and brought up in a Little field, Texas, USA.  She was married with three children and her husband paster Steve Cauble whose age 63 as of now.   Lisa when her youngest child turned 19 she filed a divorce to her husband Steve in Dec 2011 of even 24 years old marriage. But she continued to his best friend and as a married couple couldn’t be now and she still believes in marriage.

She was a contestant in the survivor Philippines on August 2012 as a Tandtang tribe which is a American competitive television reality show where she had reached to the final with her hard work and settled for the second place and missed becoming a sole survivor which worth prize of $1 million .During the competition she has announced on her twitter that she had been infected with West Nile virus which generally spread by biting mosquitos but it was then even not sure whether it was contracted from elsewhere or at the survivor Philippines which was very possible.

Earlier in the episode, which was a little controversy of the episode that because of the storyline where she had to lose her virginity and she is a born Christian since her childhood, so that it was rewritten again. “The facts of life” is also her book name which she has written with the addition of other lesson her father taught her can be found in amazon.com along with her other books.

In the recent April  2014 blog of Indiewire, there has been mention about facts of life stars Lisa Whelchel and Kim Fields reunion “For better or for worse” movie based on bestselling of the same named novel by Diann Hunt. Regarding “All because of you” is a Christian pop song album.

For which she was nominated for the Grammy award for best performance inspirational, song writer. And she is also a vocalist, and an author for the kids related books named as “So you’re thinking about homeschooling” and its second edition has also been released march 9, 2005 which is available on amazon.com as well.

This book was actually inspired by her decision to teach her own children at home herself. When she was just 12, she already had won a coveted spot on the kids television show. facts of life star, survivor, an actress Lisa’s pictures, of behind the scene, publicity pictures and other event pictures are available on imdb websites and others. Even sometimes she seems to be ambitious woman; she does several programs to make her body fit and healthy.

Joins with the team with her trainer to maintain her every day, and the fact of life is that she realized her limitation by saying in her recent interview with People magazine that she hurts her shoulder playing racquetball, she has a lower back injury from an aerobics class and she messed up with her feet while training to climb Mount Whitney. She still sticks with it stretches, Cardio, resistance, exercising and cooling down at her age now. Her short biography can also be read in wiki.