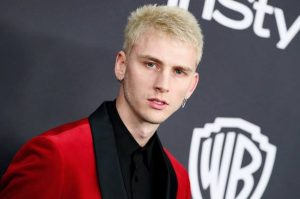 “Words don’t make you who you are.” – Machine Gun Kelly

Machine Gun Kelly, also known as MGK, was born in 22nd April, 1990 in Houston, Texas. His real name is Richard Colson Baker. He is a famous rapper who is signed to Interscope Records. He is best known for his fast rap and the unique way of rapping.

Though he was born in Texas, he was grown up in Egypt. Because of that, he can fluently speak Arabic as well. From his early age, he started to rap. He has started his professional career from 2006 when he was only 16 years old.

In 2009, he took participation in Apollo Theatre where he won the rapping competition as well. He became popular among the viewers as his songs started to feature in MTV2. He made his debut from the song “100 Words and Running”. After the success in both singles and the album, he got an offer from XXL. He got more exposure as he participated in SXSW show in 2011. In the same year, he signed the contract with Bad Boy Records.

His songs became popular to the audience. His songs were also featured in many commercials as well as in WrestleMania XXVIII. His song has been highlighted in the match between The Rock and John Cena. He recorded his first debut album in 2012. His album was also listed at #4 in US Billboard 200. His album was sold in high quantities and many people liked his most of his songs as it was heart touching as well as his unique way of presenting it through rap. He went on doing the mix tapes in 2013.

In late 2014, he announced that he is ready for his second studio album to release. He has also done many tours across the country as well as internationally. He is popular among his fans because of his tattoos also. He has a tattoo of anarchy symbol above his belly button and many more in his different body parts. His shirtless pictures are also available in the web. You can see his tattoos in these pictures as well.

He has dated many celebrities and have affair with many more. Though his name comes in different controversies of dating and girlfriend, he has never told the media about it. There was a rumor about him that he is a gay. But it disappeared after he told that he has a daughter named Casie Colson Baker. He has not married yet and he also has not disclosed the child’s mother’s name till now. He lives in a magnificent house with his daughter.

He is a tall guy with the height of 6 feet 4 inch. He has just reached 24 and has not decided to get married yet. He is a regular user of social sites where he has a large number of fans following. If you are also his fan or if you want to get more information about him, you can follow him in Facebook, twitter and Instagram. You can find his quotes on many related sites.

His songs can be viewed in YouTube where his every songs have thousands likes. As he is one of the rising stars, you don’t want to miss his songs. His popular mix tapes such as “Homecoming”, “Lace Up” and “Stamp of Approval” are also available in the web. He has the net worth of $2 million. To get his full biography, you can visit Wikipedia as well as IMDb.