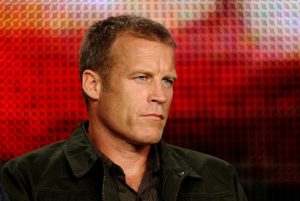 Mark Valley was born on December 24, 1964. The incredibly talented Mark is 49 years old. His birth place is Ogdensburg, New York, USA as Mark Thomas Valley. He is best known for his work on Boston Legal (2004), The Siege (1998) and Human Target (2010).The detail information and biography of Valley is available in imdb and Wikipedia.

Mark Valley graduated from the United States Military Academy in 1987 with a Bachelor of Science degree in mathematics and engineering. He was active serving in Berlin where he played Rugby for the U.S. military team, The Berlin Yanks Rugby Football Club. He also participated in the Gulf War. The good looking  American film and television actor is known for his role as Brad Chase on the TV drama Boston Legal, Oliver Richard on the NBC drama Harry’s Law, as FBI agent John Scott on Fringe, Christopher Chance in Fox’s action/drama Human Target, and as Tommy Sullivan in ABC’s Body of Proof.  While serving in the U.S. Army in Germany he got his first role, on The Innocent (1993). In 1993, he obtained the role of “Father Pete” on Another World.  From 1994–97, he took over the role of Jack Deveraux on the NBC Daytime soap opera Days of our Lives.  Valley played Detective Eddie Arlette, an American police officer in London, on the short-lived Keen Eddie in 2003.  He appeared on the television series ER as Richard Lockhart, Abby Lockhart’s ex-husband.  He also appeared on Fringe, as FBI agent John Scott. Valley played the lead in Fox’s drama Human Target in 2008.  It was announced that Valley would be join series regular on ABC’s Body of Proof in July 2012. He is popular as Det. Tommy Sullivan, Dana Delany’s love interest.  Alongside, he also co-started Delany in her short-lived series Pasadena in 2001.

In December 2008, Mark Valley married with anna torv. But they got divorce after one year of marriage. Mark ex-wife Anna Charmichael Torv is an Australian actress. She is best known for her role as FBI agent Olivia Dunham on the Fox television series Fringe (2008–2013).  anna torv cut the relationship with Mark Valley before they celebrate their second year anniversary.

According to several media gossips and rumors, the celebrity couple has ended their marriage quietly a few months ago. They met on the set when they were co-stars on FOX series “Fringe”, Recalling how “sweet”.  Valley said in an interview with EW last month, “She’d always come up to me and say ‘Do you need coffee or tea or something?’ We did get to know each other a little bit on the show. But she was working quite a bit, and I was like lying quietly on the slab. Seeing work and seeing how much she works and the amount of preparation she puts into it and how seriously she took it that was really inspirational.” Looking at Mark dating history he had an affair with anna torv but this couple celebrity separated.