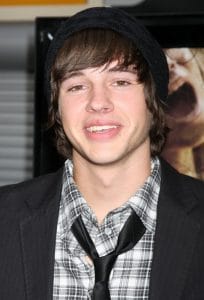 An American actor Matt Prokop (Matthew “Matt” Prokop), known for his role as Jimmie “The Rocket Man” Zara in High School Musical 3: Senior Year and Josh Rosen in the Disney Channel Original Movie, “Geek Charming” has been dating his girlfriend Sarah Hyland for the past five years. The couples are living together happily in Los Angeles.

Hyland is also a successful actor who is famous for her role in Modern Family as Haley Dunphy. Both of them are committed in their relationship and it’s really pleasing to see these young couples in Hollywood making their relationship work. They worked together in the Disney TV series Geek Charming in 2011.

In an interview, Matt said that he had a formal date with Sarah at Casa Vega for the first time. They first met each other at the audition of High School Musical 3: Senior Year movie in 2009. Matt and Sarah started dating each other when Sarah was just 17 years old.

Fortunately, there is no rumor about Matt’s affair with other girls. But, Sarah dated Max Ehrich before Matt.  Matt was born on July 29, 1990, in Victoria, Texas, United States.

He moved to Los Angeles when he was 16 years old to pursue his acting career. Matt’s parents are Debbie and Tony Prokop. He is one of Hollywood’s hottest and dashing young stars.

Apart from acting, this talented actor also enjoys playing soccer. He started playing soccer when he was three and half years old. Matt’s age is 25 years now.   Prokop has played many roles in various TV series. He played the role of Troy McCann in Hannah Montana and Underaged kid in the office in 2007.

In High School Musical 3: Senior Year, he portrayed the role of Jimmie “Rocket Man” Zara in 2008 alongside Zac Efron, Vanessa Hudgens & Ashley Tisdale. In 2009, he appeared in the TV series Medium and Furry Vengeance, he portrayed the character Kyle “K.C.” Covington and Tyler Sanders.

Recently, he was seen in the TV series Struck by Lightning and Modern Family as Dwayne Michaels and Ethan respectively. In 2013, he played the character Ian Vetter in a TV Series Perception. But, he has not done any movies yet. Matt has won the title of little Mr. Cowboy at the age of four.

As, Matt used to live with his roommate Sterling Knight before dating Sarah, rumors were spread in the media that he is a gay. But, his relationship with his super sexy girlfriend proves he is straight.  This extremely stunning actor has a perfect body measurement. He has an attractive height of 5 feet 11 inches. His shirtless pictures with girlfriend Sarah can also be found in internet and other related sites. Both of them look super-hot.

Matt can be followed in his twitter as well as Facebook page. So, if you are great fan of Matt, the do it soon. Other information about Matt can also be found on internet and relate sites. Despite facing these nonsense rumors, Matt is living a happy life with his sweetheart Sarah and hope to see them like this for lifelong.