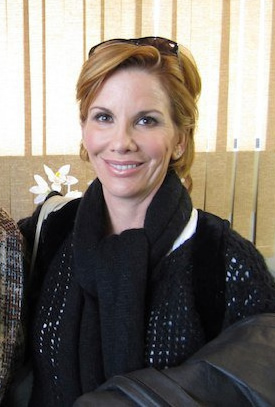 Melissa Gilbert is an actress, a book author, and a television director from the USA. She was born in Los Angeles, California to a newly engaged couple David Darlington and Kathy Wood.

Later she was put up for adoption immediately after her birth. She was adopted later by the famous actor and comedian Paul Gilbert. He had a different birth name but changed his name to Paul Gilbert to get a Screen Actors Guild card.

He and his wife, dancer and actress Barbara Crane, was the daughter of the creator of The Honeymooners, Harry Crane. The couple also adopted a son named Jonathan, who was a co-star on “Little House on the Prairie.” Gilbert’s parents got divorced when she was just 8 years old.

Her mother Barbara married Harold Abeles after that, and she had a sister named Sara Rebecca Abeles, who is the actress known professionally as Sara Gilbert, born on January 29 of 1975.

Paul Gilbert suffered a fatal stroke on February 13, 1976, at the age of 57. Barbara’s second marriage ended in divorce too. Gilbert was raised in a Jewish religious environment due to her Jewish mother but did not have any formal religious education or conversion ceremony about any religion.

She had been with dean butler in the past. She was dating then little-known actor rob lowe at the age of 17, who was also 17. Gilbert was in her convertible when she saw Lowe stop next to her at a red light in 1981.

Gilbert dated Lowe for almost 6 years. Both weren’t loyal and had affairs with other famous people during this time. She had also been in relationships with famous people like Tom Cruise, John Cusack, Scott Baio, and Billy Idol. Gilbert found out she was pregnant while making plans for their wedding.

Lowe ended their relationship as she was informed of the pregnancy. Gilbert had a miscarriage some days later. Gilbert left for New York City after her break up with rob lowe to star in the play named “A Shayna Maidel.” Gilbert also dated actor Bo Brinkman, a cousin of famous actors Randy and Dennis Quaid.

They got married on 1988 February 22, which was only seven weeks after she broke off her relationship with rob lowe. Months later, Gilbert became pregnant. She gave birth to her son Dakota Paul Brinkman on 1st May 1989.

They got divorced in the year 1992. Bruce Boxleitner’s ex-wife Kathryn Holcomb set him up with Gilbert only weeks after Gilbert’s divorce filing. Holcomb was married to actor Ian Ogilvy by that time. Gilbert had met Boxleitner when they both were on Battle of the Network Stars when she was a teenager.

Gilbert introduced her but Boxleitner ignored her because of their age difference and he was many years old than she was. The couple started dating for over a year after being together. They were engaged two times and Boxleitner dumped her each time.

They finally married on 1st January 1995 after a third reunion. Gilbert quickly became pregnant and experienced premature labor about two months before the due date. On October 6, 1995, she gave birth to a son named Michael Garrett Boxleitner.

Gilbert is also the stepmother to Boxleitner’s previous two kids Sam and Lee. Gilbert announced on 1st March 2011 that she and Boxleitner had separated.

Gilbert filed for divorce on 22nd August 2011. Gilbert’s close relative confirmed on January 29, 2013, that the actress is going to get engaged to popular actor Timothy Busfield.

They married on 24th April of the year 2013. Gilbert and Busfield have lived together in Howell, Michigan since mid-2013. This hot and sexy actress with a long list of relations in her biography has a beautiful pair of feet and legs.

Her photos on her wiki and Twitter page and other galleries show her beauty without any artificial plastic surgery or other activity. Living with her children with her last husband she has also been able to earn a high net worth through her hard work.