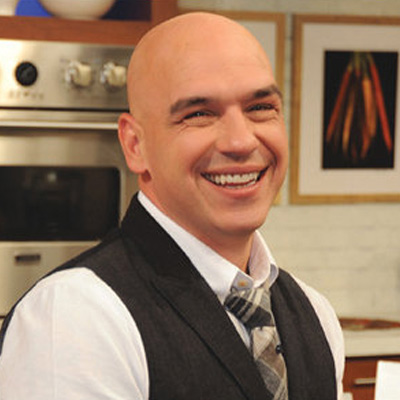 Then in 1990, he went to New York to attend America and graduated from there.  Michael is married to Liz Shanahan and this coupe has a son named Kyle. Kyle is a step son to Michael. He was only two years old when Michael and Liz met.

Well known television personality Michael Symon started his food career by doing a part time  job as a cook in Gepetto’s Ribs on Warren Rd.  Then, he worked in a Mediterranean restaurant in Lakewood (1993). After Lakewood, Michael moved to Piccolo Mondo as chef.  In February 1997, Michael and wife Liz (then fiancée), opened lola in Cleveland.

In October 2000, lola was named as one of the Americans Best Restaurants in Gourmet magazines.  After lola, Michael opened another restaurant and named it Parea in amazing city New York. In 2008, Michael opened roast restaurant at Westin Book Cadillac Hotel in Detroit and Bar Symon in Avon Lake, Ohio. In 1998, Michael debut on Food Network.

He was seen in Sara’s Secrets with Sara Moulton, Food Nation with Bobby Flay, Set, Cook, Ready etc. In 2005, Michael participated in Iron chef America and he was also seen in the television series Anthony Bourdain: No Reservations in Clelaveland. Again in 2007, he participated in Iron chef America and this time this amazing food king won the title.

Then, in April 2008, Food Network announced Michael Symon as a host of Dinner Impossible, one of the popular shows.  In November 2008, Michael appeared on Dear Food Network: Thanksgiving Disasters and “Cook Like an Iron Chef, a Cooking Channel” show in July 2010.  Another featured show of Michael Symon was Food Feuds that premiered on October 2010.

Multi-talented Michael Symon is also an author of several cookbooks.  In 2001, Michael was featured on Michael Ruhlman;s book, The Soul of a Chef: The Journey Toward Perfection which reflects Symon’s culinary perfections.

As of now, Michael Symon’s age is 44 years old.  This culinary chef’s height is 5 feet 3 inch tall. Michael is named as cleveland’s hottest chef in 1995 by The Plain Dealer Sunday Magazine and National Rising Star by Restaurant Hospitality Magazine in 1997.

Again, in 1998, Michael Symon was named one of the Ten Best New Chefs in America by Food & Wine magazine. Michael was nominated for a James Beard Foundation Award in the “Best Chef Great Lakes” category but unfortunately he didn’t win the award and in 2009 he was again nominated for the same and this time this culinary chef took away the prestigious award. His total net worth is not available in net.

Michael is on at different social networking sites such as Facebook, twitter etc. Follow his blogs for latest recopies. His detail bio is found in wiki, IMDB etc.