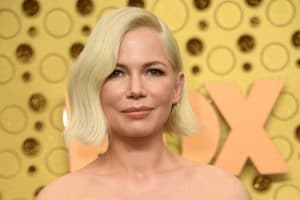 Best known for playing one of the lead character as Jennifer Lindely, a bad girl trying to make her rough life better in Teen Choice Awards winning world-famous American teen drama Dawson’s Creek(1998-2203),  the Montana native is also a fashion-diva who has posed for several reputable magazines such as GQ  and Elle UK.

At the age of 34, the award winning movies, TV shows and theatre actress Michelle is a single mother to her ten years old daughter Maltida. Maltida father was no other than Australian actor Heath Ledger, who was also her co-star in Brokeback Mountain. The year 2005 was a special one for the actress as he won various awards including Golden Globe, Independent Spirits and BAFTA for the movie as well as she met her future husband Heath. Maltida was born in the year 2007 and the couple was all happy about their future life back then.

However, their married life ended in the year 2007 with a traumatic divorce. Although, the exact reason of their divorce is not known, there sure is a possible reason that can be regarded as catalysts in breaking their strongly bonded relationship. The possible reason of their divorce is believed to be Heath’s habit of using drugs and anti-depressants and his insomnia, which forced his wife to go away. It is said that the actress was finding difficult to live with him and his unstable peace of mind.

The more sad part of this story is that “The Joker” of The Dark Knight died in January of 2008, making his ex-wife extremely sad and his daughter father-less. The result of his death has been intense to both his family and Michelle. Michelle now seems to have problem dating other guys, and even has stated officially in the media that her days after the departure of Heath has been difficult ones.

“Very obviously for me and for her, there’s a hole in our life, Of course, the natural inclination is to want to fill it and make it disappear, but what I’ve come to recently is that it’s impossible,’”

–       Michelle Williams interview with Claire magazine back in 2011

According to the report of the Office of the Chief Medical Examiner of New York, Heath death is rather accidental. The report clearly states that Heath died because of intoxication from the medicines he took.  Now, we don’t know whether his death is intentional or accidental as people don’t die generally from medication overdose. Anyway, the intoxication is stated as a mixed effect of hydrocodone, diazepam, alprazolam, diazepam, temazepam and doxylamine.

His death story gets more mysterious as most of the people who are close to Heath describe him to be non-habitual to drugs (but regular marijuana user). Therefore, people speculate that he went to depression after his divorce with Michelle.

Anyway, after their breakup, Michelle is not dating anyone as far as we know. She is completely using her energy towards acting. Moreover, she has been linked with director Spike Jonze and her blue valentine co-star Ryan Gosling post 2008. However, these affair rumors are probably hoaxes. Now, she has only one boyfriend – her acting.

Now moving to her body orientation, she is not a tall woman with the height of 5 feet and 4 inches. Rather, she is a delectable looking blonde whose short height, awesome body measurements of 37-27-38 inches (hourglass shape), toned thighs, well-maintained soft skin, well-maintained weight of around 110 lbs and charming personality create a high physical sex appeal. Unlike her Dawson ‘s Creek character bad-girl Jennifer, she has been always known as a good-girl- thanks to her good-upbringing and mature personality since childhood. Also, she is popular for her different hairstyles, which she has been adopting as her role demands.

Moreover, her net worth is speculated to be around 20 million US dollar. In 2014, her Brooklyn ivy-covered leafy townhouse located in Brooklyn was up for sale on the open market. The price tag was 7 million US dollars. We can speculate that the actress has sold the house by now making around 4 million of straight profit as she originally purchased the house for 3.6 million.

Undoubtedly, the actress is a perfect example of the quote “Beauty with brains”. At the age of 17, she won World Cup Championship of Future Trading by the profit margin of 90 percent (she turned 10,000$ to more than $100,000). Only two individuals have beaten her till now in the competition that has been running since the past 29 years.

Last but not the least, she is not related to American actress and musician/ singer Michelle Williams, who is known for her songs such as If We Had Your Eyes. However, both of them are 34 years old and US born.