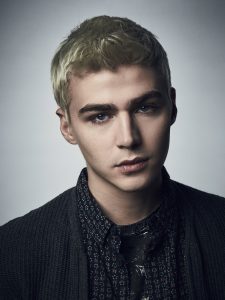 A progressing young American actor to watch out for, Miles Heizer, is famous for starring in the movie Rails & Ties” and in the NBC’s television show Parenthood.

Firstly, talking about his sexual orientation, he is not a gay because he hasn’t said it so. However, he may have some feminine attributes. Matter of fact, he has played a role of a gay teen in an episode of Private Practice.

Born on May 16, 1994, in Greenville, Kentucky, starts his acting career with a role in CSI: manyMIAMI. After that, the talented young actor gets recognized in media by shortly appearing much famous television series like Ghost Whisperer, Shark, Bones, Private Practice, ER, and Cold case till 2009.

But the breakthrough in his career was transitioned by the emotionally demanding role of Davy Danner in 2007’s movie Rail & Ties and the role of introverted and mild-mannered child Drew Holt in the 2010’s comedic television drama Parenthood. He has worked in other two movies namely Paramedic and Loon.

Did you know Amber Holt and Drew Holt of the parenthood aka Miles Heizer and Mae Whitman live together in real life?

If not, let me tell you, they Mae Whitman has rented out her guesthouse fo Miles, who is the sibling of Mae parenthood character Amber. They are best friends and exceptionally close to each other.

He was a 16-year teen when he joined the parenthood cast. Parenthood is still in operation, as the actor is now 22 years old of age. He goes to the gym as well in a timely basis.

He has now a fit muscled body with height 1.79 m tall. That’s a good height for the cutie like Miles, Don’t you think?

Both Drew and Miles are growing in their respective life.

Talking about his dating life, he is single and doesn’t have any affair with anyone. There are no any mystery girlfriend rumors about him that we know of.

The two-minute long video title is “????” and has beats from Sela, an LA based band. Miles enjoys energy drinks, orders Domino’s pizza and watches “Chopped” at home in the video.

His last 15-second video with his on -screen sister, shows both of them together singing Taylor Swift’s song “Mean’. The music video is directed by The Perks of Being a Wallflower actor Johnny Simmons.

One can always connect with him on Twitter where he has 27.k fans. His twitter username is @milesdheizer. He is famous in the Sound cloud as well.