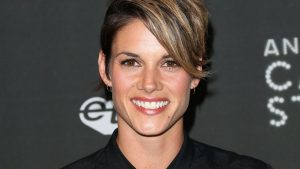 Fashion model turned actress Melissa “Missy” Peregrym is married to good-looking nerd Zachary Levi since the June of 2014. Their wedding was a complete surprise as people only got to know about the situation after the couple posted an all-happy picture in a tweet. The picture showed the Chuck star and the Rookie Blue Star wearing similar blue hoodless with respective “Mr.” and “Mrs.” marking.

The picture tweet of Missy also has caption with it which states:

However, their fans are refusing to believe that the couple first met in the coffee date in the year 2014. Many famous website and discussion pages suggest that the couple started dating each other in 2004, and they had a breakup in the year 2008. Before 2004, Zachary dated Australian actress and model Rachael Taylor. From 2008 to 2010, the Tangled star dated American singer-songwriter and actress Catlin Crosby.

On the other hand, girlfriend turned wife Missy, who was born in a family comprising of his minister father and housewife mother, was a tomboy while growing up. Because of her value-based Christian childhood, she always felt like she was put into a box. But, later, she decided to get outside the box and judge the world as a rational person. In this way, a young woman, Missy became open to many things including relationships.

Till now, Missy has dated two persons namely Brandon Countee (2005-2006) and Pittsburgh Steelers quarterback Ben Roethlisberger (2007-2008). It is rumored that Ben and Missy breakup occurred because of Ben flirty nature. Moreover, the rumor further states that the quarterback was caught kissing an unknown woman in a party.

Furthermore, the rumor that Ben Bass and Missy are dating is probably a hoax. However, Missy’s character Andy is Ben’s character Sam ex-girlfriend in the show Rookie Blue. Also, the current rumors speculating Missy to be pregnant is also a hoax.

Now moving on to her physical orientation, the former model has an average height of 5 feet and 6 inches. Plus, she has got good body measurements of 35-25-35 inches that makes her fit banana shaped body. Also, her athletic looks surprise people given her banana shaped body.

Anyway, she has derived her athletic shape from her school-day participation in hockey, soccer, basketball and gym. After completing her school studies, she even worked as a basketball coach. And it wasn’t long before she showed interest in modeling. Moreover, her weight of around 125 lbs has complimented her sexy athletic looks. Also, her names come in the list of few models that has excelled in modeling despite of their not so tall height.

Thanks to her regular workout plans that includes tennis and basketball, she has been able to effectively portray the role of rookie cop Andy McNally in the Canadian Police Drama Rookie Blue. Also, her diet plans include only organic foods. No wonder, she has got well-maintained skin.

Boyfriend turned husband Zachary Levi and Missy Peregrym as husband and wife have a combined net worth of around 10 million US dollar. Zachary and Missy are quite opposite to each other in terms of personality. Matter of fact, Zachary is a nerd who likes to explore his wide interest in video games, comics and action figures during his free time whereas Missy is of extrovert personality who doesn’t like to spend her time being enclosed inside a room.

However, both of them are born Christians. Zachary has stated publicly that he is a progressive Christian by religion. Plus, he has also stated that his sole game-plan to know a girl better is to understand her views on politics and religion. Anyway, Missy may not be a die-heart follower of Christianity but it is a sure fact that both of the personality has developed similar kind of values because of their respective traditional upbringing.

To watch the natural beauty appealing figures more closely, one can refer YouTube for her hot bikini scenes that she gave in the TV show Rookie Blue.

Other wiki about the TV shows and movies actress professional life can be accessed via Wikipedia and IMDB’s biography on her.  Plus, her fans can connect her via social networking sites like Twitter, Facebook and Instagram.