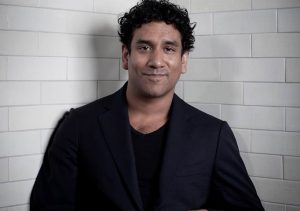 Naveen Andrews was born in Balham, South-West London, to a fairly conservative family. He is of Indian descent, not Iraqi, as people confuse him for. He was raised during childhood in Wandsworth with his two younger brothers. His father was a businessman, and mother was a psychologist.

They encouraged him to follow an academic route. Whilst at Emanuel School at the age of sixteen, he fell in love with his mathematics teacher, Geraldine Feakins and they had a son named Jaisal born in the year 1992. Andrews had a strained relationship with his father for this incident.

Andrews became an alcoholic and a drug user during his early film career, struggling with a two-year addiction to heroin. Andrews however stated in a 2008 interview with Jonathan Ross on the channel BBC1 that he had been clean for 4 years.

Andrews was dating actress barbara hershey in his early days. She is twenty-one years his senior and they lived together in Los Angeles. He and his girlfriend Barbara separated briefly in 2005 and, during that time, Andrews had a son named Naveen Joshua, with another woman named Elena Eustache. He was a naughty man. Andrews and Hershey became together again and then since separated, after spending 12 years together. Though he cannot be married for a long time and sustain with one wife, he surely is popular among girls.

He faced protests from his parents to pressurize him to follow an academic route, but Naveen followed his early interest in acting, and he auditioned at London’s Guildhall School of Music and Drama. He was accepted among such notables as Ewan McGregor and David Thewlis in that show.

His talent and training soon led him to earn his first role in screen in Hanif Kureshi’s film London Kills Me, and later he received the leading role in the BBC drama The Buddha of Suburbia and then afterwards going on to make a film version of the Hindu holy sex guide book Kama Sutra. Prior to joining the cast of lost series, Andrews was also best known for his highly acclaimed portrayal of the Sikh named Kip in the movie The English Patient. Just before the filming began for the third season, Naveen was filmed in the Robert Rodriguez movie Planet Terror, which also starred actor Jeff Fahey. Planet Terror was released all over as a double feature film, along with another one Death Proof, which starred superstar Zoe Bell.

Talking about more recent projects, he starred in the movie The Brave One alongside sexy and hot Jodie Foster.

Andrews was cast as Sayid Jarrah on lost in the year 2004, though he first thought that the initial premise was limited. However, the character quickly got popular among the fans and he became popular among the viewers in a short span of time.

With a significant height of five feet and nine inches, he has attractive looks. He is popular among the viewers of the series in which he acts. People admire him and girls go crazy for him. He has posed shirtless for many magazines and web galleries. His wiki article and imdb article show in detail his achievements. Also popular among children as well as adults, he has established himself as an old and experienced actor starting from a very small age and appearing on various roles in different movies effectively. He certainly has a bright future ahead.