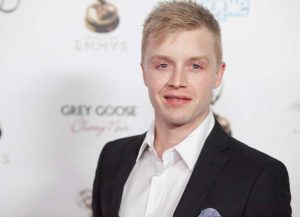 Mostly known for starring as aggressive, difficult, and frustrating Micky Milkovich in the American television comedy drama shameless, Canadian actor Noel Fisher’s age is 30 as of 2014.

The special thing about him is he can act in different types of roles and in fact, he has delivered many memorable roles both in television and movies in his 15 years of acting career till now.

Other of his memorable portrayals are quiet and intelligent Cael Malloy, a member of the family whose members are Irish Traveller con artists and thieves in the American television series The Riches, dimwitted part and victim of New York Massacre of 1988, Ellison “Cotton Top” Mounts in the Emmy Award winning real-story based mini-series Hatfields & McCoys and 1500-year-old vampire Vladimir in The Twilight Saga Breaking Dawn Part -2.

Nevertheless, his fans are dying to see carefree and fun-loving Michelangelo, one of the four ninja turtles, in the upcoming 2014’s feature film Teenage Mutant Ninja Turtles. Neal is responsible for the voice and motion of Michelangelo. The movie is expected to be officially released in August of this year.

Surely, he will take Michelangelo to the next level. Just, look at his records. Most of the portrayals he has had in his career are remembered today by lots of people around the world no matter how small or big the role is. Simply, he is a multi-dimensional actor who doesn’t believe in stereotypical views when choosing a role.

As of 2014, his age is 30. Multi-talented Noel Fisher is described to be dating his long-time girlfriend but the rumor can’t be verified. The following link shows a video where he and a girl get reported by an interviewer in a public place. In the interview he says, he met the girl in an American Canadian Television show. In the same video, he says his guiltiest pleasure is frozen yogurt.

Moreover, no one can confirm whether he is a homosexual or not in real life but his character Micky is a homosexual in shameless. All of the gay rumors about him can’t be verified as well. Moreover, all the rumors projecting Noel fisher and his shameless co-star Cameron Riley aka Monaghan Ian Gallagher in a gay affair in their real life can’t be verified as well. Plus, he has already responded to never-ending twitter inquiries on his Twitter account tweeting that he can’t have any boyfriend because he is not gay.

Nevertheless, Micky and Ian’s nude/ shirtless scenes in the television series shameless are extremely popular in their gay fans community.

Another wiki on his professional life can be extracted from his Wikipedia biography on him. One can follow him on Twitter.

Also, his Instagram fan sites would be a better option to view his pictures plus.

In real life, he is not even a bit retarded like his shameless character. He is a fun-loving and tall man with a good height of 5 feet and 7 inches. He has deep interests in boxing, bicycling, running, snowboarding and skiing. In addition to that, he plays guitar, drums, harmonica, ukulele, and keyboard.

Last but not least he is a former student of kickboxing, Taekwondo, and XMA (Extreme Martial Arts).