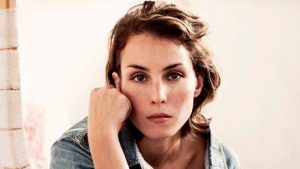 She was born on December 28, 1979, in Hudiksvall, Sweden. She moved to Iceland with her mother at the age of 5 as her parents got divorced. She is best known for her roles as an emotionally and physically abused or scarred woman.

At the age of 7, she got chance to play in the Icelandic movie “I skugga transits”. Though she got the nonverbal role, she dreamed to become an actress after acting in that movie. At the age of 15, she left home and went to Stockholm to start her acting career.

There, she enrolled in Stockholm theatre school. She made her debut in 1996 from the TV series “Tre kronor”. Rapace studied at the acting school from 1998 to 1999. She performed many shows in the theatres. She has played different roles in various movies during her career. Most of her commonly knows her from the movie “The Girl with the Dragon Tattoo” series.

Here, she played the role of Lisbeth Salander. This is the film adaptation of the bestselling novel “The Girl with the Dragon Tattoo”. She reprises on its sequels as well. Some of her successful movies are The Monitor, Prometheus, Dead Man Down and Passion.

She is currently engaged in two projects “The Drop” and “Child 44”. People have seen her in music videos as well. She has appeared in “Doom and Gloom” by The Rolling Stones in 2012 and “eez-eh” by Kasabian in 2014.

She has won many awards because of her passionate acting style. From the movie “Daisy Diamond”, she has won Bodil Awards and Robert Awards for Best Actress. From the series of “Girl with the Dragom Tattoo”, she has grabbed many awards. She was also nominated for Emmay Awards from the movie “Millenium” in 2011.

Despite her age is 34, she has maintained her figure properly. Her body measurements are excellent i.e. 34-25-34 and weighs 53 kg. She has brown eye color and is 5 feet 4 inch tall. Many young boys are still fans of her hot body and sexy legs.

She was married to Ola Norell who is also a Swedish actor in 2001. After they were married, they chose the common surname Rapace which means “Bird of Prey”. The couple has got one child, a son. Unfortunately, because of their cold relationship, they filed divorce in 2011.

After divorce, there has been some rumor that she is dating with some of her co-stars. She currently commented that she want to have an affair and want more children. This can be good sign for those who wanted to become his boyfriend or husband.

So, good luck with that one Noomy!!! Though she has achieved height of success, she was unable to speak English properly. So, she has watched numerous English language movies, BBC, CNN and many TV talk shows.

She thinks that there should be more extreme movies in Sweden. It can create block to always have the audience mentality. This gorgeous lady has earned the net worth of $20 million. She has made her presence in twitter as well as in Instagram.