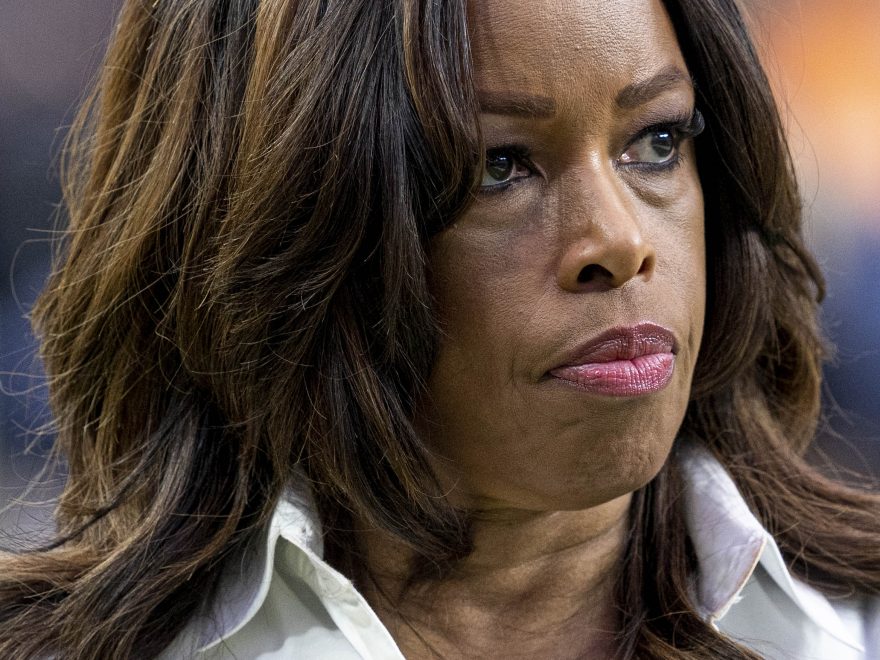 Pamela Donielle, popularly known as Pam Oliver is a successful American sports newscaster for a Fox Network. She was born to an African American family on 10th March 1961 in Dallas, Texas. This super smart lady was the first baby of her parents, John Oliver and Mary Oliver, a military employee and a housewife respectively. Oliver’s age is 54 years old now. She is popular among people for her work in various National Basketball Association (NBA) and National Football League (NFL) games.

Oliver faced many challenges of racism. She devoted a great amount of effort to getting into this stage of life. Despite belonging to African descent, Pam has been successful to make a place among elite journalists of western media. Now, she is a top sports journalist. Pamela has won many awards, including an Ebony Magazine award. As her father was a military employee, she got an opportunity to travel to different places like Washington, California, Florida, and Michigan.

Oliver did her schooling at Niceville High School, where she excelled in many sports like basketball, tennis, and track and field. Oliver’s source of information was her father. Her keen interest in sports developed in her mind since her childhood when she used to sit down with her father to watch sports.

Later, she was given a sports scholarship at Florida A & M University and was enrolled there. There she became a college All-American in both the 400-meter and the mile relay. Oliver completed her bachelor’s degree in broadcast journalism in 1984.

Oliver did her broadcasting debut in 1985 at WALB in Albany, Georgia as a news reporter, where she flourished as a news reporter and achieved local fame. After that, she moved to WAAY-TV in Huntsville, Alabama, and then again moved to WIVB-TV in Buffalo, New York in 1988.

Two years later in 1990, she again shifted to WTVT in Tampa, Florida, where she began her career as a sports anchor. In 1993, Oliver joined the ESPN network where her career start flourishing, and then joined Fox News in 1995 as a sideline reporter at NFL games.

She collected various new skills and invaluable experiences by working in these many networks. Again she joined TNT for NBA playoff coverage. Today, she can be figured out as an outstanding sports newscaster, as we know hard work pays off. She was also awarded as “Outstanding Woman in Journalism”, by Ebony (2004) Magazine.

Oliver has a model height of five feet nine inches. She has a beautiful and surprisingly hot bikini body and her pictures in swimsuits are widely searched by her fans on many related sites. She revealed the secret of her charismatic personality as being a diet conscious and a fitness freak. She does a regular workout to stay fit.

She does her hair and makeup herself. This reason made her the victim of many controversies regarding her hair-do, weave, and her un-customized wig. pictures of her hair and makeup can also be found on other related sites. She can look super-hot if she does her hair properly and neatly.
Beyond her successful professional life, she has also a successful personal life. She is the perfect definition of a wife that many men wish to be. She is married to Alvin Whitney and they live in Atlanta, Georgia. Her husband Whitney is a dedicated and popular sports producer. They are having a blissful married life.

No, rumors can be heard about her extra-marital affairs and having any boyfriend till now.  This talented sports news caster’s salary is estimated to be $ 1 million, which is a ridiculously great amount and a source of inspiration for others as well. In 2013, she was a hot topic for people because of insulting the jets, and the Giants during the Super bowl breakfast, but she intelligently handled the situation and regained her position wisely.

We can get her latest tweets and her updates by following her on Twitter and her Facebook fan pages. Her biography can also be accessed through wiki and IMDb. Her professional and personal affairs can also be known through the wiki and other related sites.

Pam Oliver was born in . Pam Oliver is SportCaster by profession, find out mroe facts, education, weight, and more.