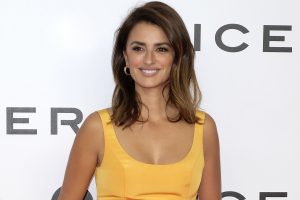 The most difficult thing in the world is to start a career known only for your looks, and then to try to become a serious actress.

No one will take you seriously once you are known as a pretty woman.- Penelope Cruz Known to be a strong and opinionated actress, Penelope Cruz was born in Alcobendas, Madrid in April 28, 1974. She is popularly recognized as the “Spanish Enchantress” outside her country. She is an actress as well as a model.

She made her debut in the early age of 15 in 1989. She also hosted the television channel “Telecinco” for seven years. She was a compulsive performer from an early age. She made her movie debut in “The Greek Labyrinth” in 1993. She also showed her capabilities in the Oscar-winning movie “Belle Epoque.”

In her career, she has played more than 50 movies and get high praise from critics as well. Her famous role in movies are as Angelica in “Pirates of the Caribbean: On Stranger Tides”, Carla Albanese in “Nine”, Maria Elena in “Vicky Cristina Barcelona”, and Raimunda in “Volver”. She has the trademark of long dark brown hair. She is 5 feet 6 inch tall from feet. She came to Los Angeles in 1994 for the first time. At that time, she cannot speak any English.

She only knew the two sentences which are “How are you?” and “I want to work with Johnny Depp.” She is also known to be the highest paid actress as she got a salary of $2 million from the movie “Vanilla Sky” alone. Because of her excellent body measurements, she was time and again selected in the list of sexiest woman in the world. Though she has got the height of success, she always say that she feel the same feeling in terms of her work.

Anyone can always learn more in the field of acting and there is always more. she was in the relationship with Tom Cruise for three years. Their relation ended in 2004. She publicly said that she want to adopt the baby in 2007. In the same year, she started dating with her co-star in “Vicky Cristina Barcelona”, Javier Bardem. They got married in 2010 in the Bahamas. They have two kids, son Leonardo and a daughter Luna.

After the birth of the children, she has been advocating breastfeeding. Because of their calm relationship, there is no problem of the divorce from her husband. As being the highest-paid actress as well as the most successful one, she has earned a net worth of $55 million in her career.

She regularly says that one cannot live their life looking at themselves from someone’s point of view. She has donated a lot of money and time in charity as well. She has worked in Uganda and India assisting in a leprosy clinic.

That trip also inspired her to start a foundation for the support of homeless girls in India. She has also advocated in the awareness campaign of AIDS in International AIDS Day in 2010. Lover of the Italian culture, she has also appeared in different functions regarded with help campaign.

She has also got many awards including Oscar, BAFTA Awards, Alma Awards and many more. She is the first Spanish actress to ever win Oscar award. If you also want to know more about her biography, you can visit wiki. You can also follow her on Twitter.