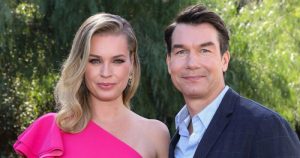 Rebecca Alie Romijn was born in 6th of November, 1972 in Berkeley who is best known for her role as mystique in X-Men movies. She was a former model as well who has been active from 1991 to 2001. She started her acting career from 1997 and she is still continuing it.

She has always dreamed about being a model from her early age. She maintained her great physique till now though she has reached the age of 42 from 2015. As a model, she got chance to appear in Victoria’s Secret as well as Sports Illustrated Swimsuit.

She was very popular model in 1990s. After she started to appear in the movies and the TV shows, her modeling career declined. She has been known as the dedicated actress in the Hollywood.

She made her debut in the TV shows from the popular TV series “Friends” in 1997. After watching her skills, she was offered to host “House of Style” in 1998. She has worked in many successful TV series such as “Pepper Dennis”, “Ugly Betty”, “Eastwick”, “Skin Wars” and “The Librarians”.

Form her role as Alexis Meade in “Ugly Betty”, she was nominated for Screen Actors Guild Award for Outstanding Performance. Though she has always loved to play in the television shows, she is more popular in the movies.

She first appeared in the movie in 1998 in “Dirty Work”. She got chance to play the role of Raven/Mystique from which her acting career take a boost.

From her role, she won the Blockbuster Entertainment Award for Favorite Supporting Actress and Saturn Award for Best Supporting Actress. She also appeared in X2 and X-Men: The Last Stand. Other than these movies, she has also worked in “Rollerball”, “Phantom Halo”, “Lake City”, “Man About Town” and “The Alibi”.

Rebecca has the tall hourglass figure with the height of 5 feet 11 inch. She has always maintained her body and the weight i.e. 54 kg. She has the measurements of 37-27-36. She was also in the list of Maxim magazine Hot 100 in #30. She got married to John Stamos in 1998. But their relationship did not last and they got divorce in 2005.

Then, she got married to Jerry O’Connell in 2007 in the surprise wedding party where their friend and families were brought together as they have said of having barbeque party. She became pregnant for the first time in 2006 and given birth to twins: Dolly and Charlie.

She is very fond of her children and always makes free time to remain with her kids. Her husband is also very supportive for her career and they are happily living together.

She has always been popular because of her hot and sexy looks. She has the net worth of $148 million. If you want to know more about her, you can follow her in her social networking accounts such as Facebook and Instagram.

She has a large number of followers in Twitter as well. Her movies and the interviews can be watched in YouTube.