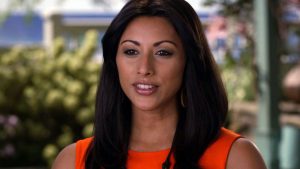 “I remember my dad telling me that you have one life left and you have to pursue what you want to pursue and when I said I wanted to be a musician, I wanted to go to the art, he cried, but he was amazingly supportive and now I look back, I was this little girl who grew of in a small  Lincolnshire County in London.” – Reshma Shetty

If you have seen Royal Pains, you may have noticed the gorgeous, spunky, smart and courageous physician assistant. Meet the physician assistant aka actress Reshma Shetty, a British/American diva of Indian ethnicity. Divya is a physician assistant to the lead character “Dr. Henry “Hank” Lawson” aka actor Mark Feuerstein in the hit medical/comedy drama. In real life, most of the members in Reshma’s family are doctors.

She is a woman of diversity weather that is her rich ethnic background or her life interests. She is a successful actress, her body measurements are exotic, her posh accent is fabulous, plus she can sing and she can cook. Naturally, she is much more than just wallpaper.

A frequently asked question about Reshma : Why is her character Divya so popular in Royal Pains?

“Except looking gorgeous in the show, Divya brings spunkiness and realness to the show. Divya choices of dresses in the show are appraisable. Divya has high sex appeal plus she is smart in the show. And Divya always knows what she is doing.  Nevertheless, actress Reshma Shetty non-Cherokee Indian descent makes her the most suitable person for the character of Divya. Really, Divya is a valuable asset to HankMed and the show would have been not so interesting without smart, talented and gorgeous Divya aka Reshma Shetty” – A television critic

In her childhood, when everybody was playing sports, she was playing piano and violin.  Born on 2 November 1977 to Indian parents in Manchester, England, down-to-earth Reshma followed her passion for music even after moving to USA. She was raised in England and Virginia, United States. Upon moving to USA at the age of 16, she was supposed study pre-med at James Madison University. But, with music inside her heart, she wins various vocal completions and so decides to graduate with a B.A. in opera performance. Later, she earns a Master of Music in performance from the University of Kentucky and artist diploma in opera from Cincinnati Conservatory of Music.

American television/movie star and daughter of 2 medical doctor, Shetty has been the Dove face for India in the past. With experience of engaging in music and singing since her school days, Reshma, starts her career as a female lead of a touring company of Bollywood Themed Musical “Bombay Dreams”, which music was composed by Golden Globe and Academy Awards winning Indian music composer, A.R. Rahman.

“I want to be a movie actress who has won big awards such as Academy Awards.” -Reshma Shetty (2009)

Well, she definitely thinks sky is the limit. Whether she will win such a big award in coming future or not, that’s the matter of working on other projects except Royal Pains.  But she is undoubtedly successful in winning our hearts from her nearly seven years on on-screen experience till present. Except Royal Pains, she has worked on few indie movies and starred as guest in 30 Rock and CSI:Miami. Details on her personal life can be assessed via Wikipedia’s biography on her.

She is a hot woman of Indian ethnicity with the body measurement of 32-25-32(bust-waist-hip) and the height of 5 feet and 4 inches. Also, her long legs makes her look tall even her height is an average height. Although there are no bikini pictures of Reshma online, there are few fake ones which one may one to view. Anyway, if you analyze her authentic picture, you will know that her body shape lies somewhere in between hourglass and banana. But, she is more hourglass shaped than banana shaped. Her weight probably falls under range of 120-135 pounds.

Reshma married life is equally successful as her professional life. She was married to Deep Katdare, an Indian American actor who starred on Bombay Dreams along Shetty on March 19, 2011. The couple had an Indian style wedding where only limited guests were invited. The couple is extremely busy on their professional career and that’s the reason why they have no baby till now. However, Reshma Royal Pains on-screen character Divya is a single mother and in fact a courageous conservative woman turned single mother. Anyway, recent rumors stating Reshma as a pregnant woman are probably hoaxes.

One can follow the Indian American diva via twitter. She is sexy or not, you judge it. But she really has sizzling physique, long shapely legs, sweet-girl face and tight breasts.