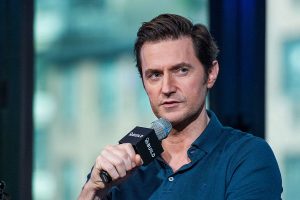 Richard Armitage (born as Richard Crispin Armitage) was born on 22 August 1971 to Margaret and John Armitage at Leicester, England. His mother is a secretary and father is an engineer whereas Richard is an actor.  He completed his school from Huncote Community Primary School located in Huncote, Blaby District, and Leicestershire.

He learned music, playing the cello in school and local orchestras as well as flute at Brockington College in Enderby. He then attended Pattison College in Coventry, learned dancing and acting there and studied at the London Academy of Music and Dramatic Art (LAMDA). He earned A Levels in music and English.

At the young age of 17 Richard joined a circus in Budapest for six weeks to get his Equity card. After earning equity card he returned back to England and started a career in musical theatre. He performed in various productions like 42ndStreet and Annie Get your Gun, Cats etc.

After gaining skills LAMDA, he came back with the Royal Shakespeare Company’s productions of Macbeth, The Duchess of Malfi as a supporting actor.  He also played small roles in TV’S and films he also acted on Birmingham Repertory Theatre’s Hamlet and Four Alice Bakers. In 2002, he was starred in Use Me As Your Cardigan (Charm Offensive’s production) and Sparkhouse (BBC Drama). Richard first leading role was in Elizabeth Gaskell’s North & South (BBC adaptation) as textile mill owner John Thornton.  Once again in 2006, he was cast in BBC series Robon Hood as Guy of Gisborne.  The third and final series of Robin Hood started on 28 March 2009.

In 2006 he also appeared in Christmas special of The Vicar of Dibley, as Harry Kennedy, He played biker Ricky Deeming in the detective drama George Gently with Martin Shaw and Lee Ingleby in 2007. In 2008, he joined the cast   of Spooks as the Lucas North. Again in 20 May 2009 Richard appeared in the BBC1 drama moving On as John Mulligan.

He was stared in strike back for Sky1 in 2010. In July 2011, he was seen in the film Captain America: The First Avenger as Nazi spy Heinz Kruger. Once again casted in The Hobbit: An Unexpected Journey, Richard describes the character of thorin as being complex and flawed. In 2012, he was cast in Into the Storm from New Line. This film will release on August 2014.  In March 2014, Richard started filming for Urban Grimshaw and the Shed Crew – an adaptation of Bernard Hare. The release date of this movie is not set till date. Richard did number of movies.

Richard Armitage seems to be a very private person when it comes to talking about his personal life.  Richard Armitage is not married but there have been rumors of a long term relationship with his girlfriend. One of the strongest rumors linked with Richard is “openly gay” (says McKellen) costars Lee Pace. However, Richard does like to keep his personal life personal and out of the spotlight. Hence, information related with his wife, dating history, married, divorce etc. are not clearly opened by any sources.

This handsome hunk height is 6′ 2½” (1.89 m) tall and handsome actor weighs 165lbs. he has got natural blue- grey eyes and his trademark is his baritone voice. His articles and interviews can be found in http://www.richardarmitageonline.com/articles/articles-2013.html this actor looks more hot and sexy in shirtless pictures. He is on at social networking sites such as twitter, Facebook etc.