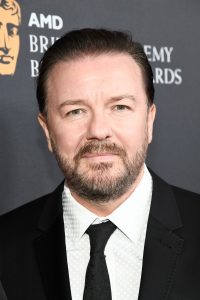 “I hate lateness. I hate people who are late. There is no excuse for turning up late for anything. I’ve never been late for anything in my life. I was actually born a week premature, because I wanted to be early for my own birth. Being late is an insult to me.”

Ricky Gervais is a popular name in English movie industry who has worked as director, producer, actor, musician, comedian as well as screen writer. He is a versatile talent of this field who is also the former radio presenter. He was born in 25th of June, 1961 in Whitley, Birkshire. He started his professional career from 1982 and he is actively involved here till now. Though he had never expected to be a successful actor, fate has chance his position to this industry.

After the completion of his study from University College London, he started his career in the music field. He has struggled a lot to choose his career. He has worked in many movies as well as TV shows. In the movies, he made his debut from “Dog Eat Dog” as a bouncer in 2001.

He has been popular from his roles in TV series rather than from the movies. He has also performed his comedy in various stages. He became the director, writer as well as producer from the movie “The Invention of Lying”. He has worked in the movies such as “Cemetery Junction”, “The Muppets”, “The Unbelievers”, “Escape from Planet Earth” and “Night at the Museum: Secret of the Tomb”.

He started his TV screen life from “The Jim Tavare Show” in 1999 where he played in various characters. He has also written 12 episodes of this show. His popularity increased overnight after he played the role of David Brent in the popular TV series “The Office”. He is also a co-creator, director and writer of this series. Some of his popular TV series are “Extras”, “Sesame Street”, “Family Guy” and “Derek”. From his performances in different platforms, he has been honored from many awards as well. In 2002, he won the British Academy Television Award for Best Situation Comedy and British Comedy Award for Best Comedy Actor.

In that same year, he also won the Broadcasting Press Guild Award in Writer’s Award. He has won many awards from his role in “The Office” such as Golden Globe Award, British Academy Television Award and British Comedy Award. From the TV series “Extras”, he has won Banff World Television Award in 2006. He has also won Satellite Award for Best Actor from the movie “Ghost Town”.

He is a tall guy with the height of 5 feet 8 inch and has the weight of 91 kg. Though he is not married yet, he is living with his girlfriend in Bloomsbury. Their romance has already reached 32 years. In his view, he has not made her his wife as it does not matter whether they are married or not.

As they love each other and dedicated their life to each other, they do not need any ceremony to prove it. He is a supporter a gay rights as well. As he has made up his career from his young age in this field, he wants to remain here for a long period of time.

He was everywhere in the media lately because of his weight loss. He considered himself as a family guy and spends as much time as he could with his family. He is popular in the social media as well. He has the net worth of $112 million. If you are his fan, you can follow him in Facebook, twitter and Instagram. You can also find his shirtless pictures in the web. His full biography is available in Wikipedia and IMDB.