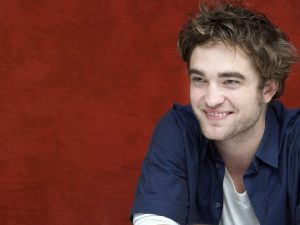 Robert Douglas Thomas Pattison, Popularly known as Robert Pattison is an English actor, model, musician and producer. He was born on 13 May 1986 in London, England to parents Richard and Clare. His father imported vintage cars from America and his mother worked for the modeling agency. He attended Tower House School until he was 12, and then attended The Horrodian School. Then he became involved in amateur theatre at the Barnes Theatre Company at the age of 15. Pattison has a british accent.

Pattinson started his career by playing Cedric Diggory in Harry Potter and the Goblet of Fire. Later he landed the leading role of Edward Cullen in the film adaptations of the Twilight novels by Stephenie Meyer, and became famous worldwide thus establishing himself among the highest paid and most bankable actors in Hollywood. Pattison was named one of the Time Magazine’s 100 Most Influential People in the World as well as the Forbes ranked him as one of the powerful celebrities in the world in the Forbes Celebrity 100.

Pattison has also a great interest in singing. He plays and composes his own music for his movie. He had also sung for the Twilight film series and How To Be. But, his modeling career was not successful as his acting career. Pattison also did modeling when he was 12 years old. He also appeared in the advertising campaign for Hackett’s autumn 2007 collection.

Earlier Pattison had a supporting role in the made-for- television film Ring of the Nibelungs in 2004 but his scenes were later deleted. Then he was scheduled to appear in the UK premiere of The Woman Before at the Royal Court Theatre, but was fired shortly before the opening night and was replaced by Tom Riley. After that he appeared in Harry Potter and the Goblet of Fire, for which he was named that year’s “british Star of Tomorrow” by The Times.

In 2008, he had a coveted role as Edward Cullen in twilight. The film was released on 21 November 2008 and turned Pattinson into a movie star overnight. He and his co-star kristen stewart’s chemistry was praised by many viewers as his role also led to his many fans. The New York Times called Pattinson a “capable and exotically beautiful” actor. Pattison’s next film The Twilight Saga: Eclipse was released on June 2010, earning $698,491,347 worldwide.

Pattison is also a good guitarist as well as pianist. He composes his own music. He was named as the “Sexiest Man Alive” of 2008 and 2009 by People Magazine. Pattinson was also named as one of the top 49 most influential men of 2009 by Askmen. Vanity Fair named Pattinson “the most handsome man in the world” along with Angelina Jolie as the most beautiful woman in the world in 2009 as well as named him as one of Vanity Fair’s “Top Hollywood Earners of 2009” with estimated net worth of $18 million in 2009.

Apart from his acting career he is also a man with the great heart. Pattison is a supporter of ECPAT, PACT, GO Campaign and member of International Medical Corps. He has promoted and share details about cancer through Public service announcements to raise awareness about the disease.

Robert has a killer looks which can easily woo any women. He has a tall and macho body built. He stands at the height of 6 Feet 1 inch. He has also gone shirtless in many movies. You can check this out in Twilight Saga: Breaking Dawn part 2.

Regarding his personal life, there are many rumors flying about him and affairs. He was rumored to be dating Imogen Ker, Katy Perry but, reality is Pattison is dating his twilight co-star and girlfriend kristen stewart. This can also prove that he is not a gay. It was rumored that Pattison is dead in a car accident. Pattison was a smoker but he quitted smoking later on.

Other information about him can also be accessed via his personal as well as official sites. His latest style and fashion trends can also be found in coolspotters.com as well as his astrology records are also available in internet.