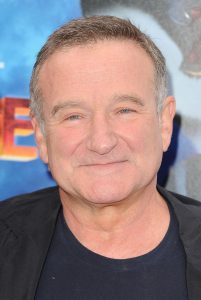 “For me, comedy starts as a spew, a kind of explosion, and then you sculpt it from there, if at all. It comes out of a deeper, darker side. Maybe it comes from anger, because I’m outraged by cruel absurdities, the hypocrisy that exists everywhere, even within yourself, where it’s hardest to see.”- Robin Williams

Widely recognized artist having career in both in movies acting and stand-up comedy, Robin Williams is identified for his improvisational skills in Hollywood industry. Born in 21st July, 1951, Williams (Birth name Robin McLaurin Williams) was raised in wealthy family near Chicago, Illinois, U.S. Preliminary made his debut as a stand-up comedian in San Francisco and Los Angeles, later in his early age, he became the leading comedian in the mid 1970s. One of his greatest TV shows of all time “Mork and Mindy” raised him as talented artist in public eyes. During 80’s, everyone was anticipating him to be in the film industry as well so, William enter into the industry when he made his debut in “Popeye”. After he made his appearances in several highly praised movies such as “The World According to Garp”, “Good Morning”, “Vietnam”, “Dead Poets Society”, Awakenings”, “hook” and so on. His recital as therapist Dr. Sean Maguire in “Good Will Hunting” was widely accepted and recognized, he was awarded with the ‘Academy Award for Best Supporting Actor’. Throughout his career, he received six Golden Globe Awards, Two Screen Actors Guild Awards, two Emmy Awards and five Grammy Awards. In his remarkable career, he was able to accumulate wealth net worth of $130 million dollars but due to undesirable circumstances which he faced due to bankruptcy his wealth decline down to net worth of $50 million dollars.

Regarding about Willams personal life, it reflects very unique and unstable dramatic characteristics of love and hatred which he never thought that could happen so real in his life. In his life time, the 5 feet and 7 inches tall in height Williams married thrice, in his first relationship with his first wife, he became father of a child, soon it didn’t last long and they divorce. Similarly, there was an issue about his affair with Marsha Garces who was pregnant with his child. They got married and in the family they had two kids among them one of his daughter Zelda Rae Willams is currently an actress, but, having children didn’t made them to be together, rather, they got separated in 2010. And in the same way, he married to Graphic designer Susan Schneider his third wife and the couple bought a house in Sea Cliff in San Francisco, California.

On the morning of August 11, 2014, Williams was found dead at his home in Paradise Cay, California. The news of Williams’s death became massive viral Worldwide and it rapidly gained his publicity in various social media and other media channels. During his funeral, dozens of leading celebrities and stars came to make tribute to his life and career in San Francisco.

The kind of contribution he made in the Hollywood industry really weight more as a result he was honored with his name written in the Hollywood Walk of Fame. To know more about him related to his biography, you can simply visit wiki and IMDb. We can still his shirtless pictures and information in the social networking sites such as Facebook, twitter, and Instagram. Although, he left us from this world his legacy and influence still remains forever in the Hollywood industry and to his fans.