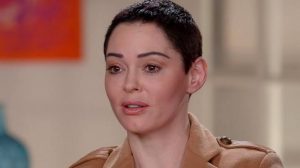 Rose Arianna McGowan was born on 5th of September, 1973 (her age is 41 years old) in Florence, Tuscany, Italy. She was the second of the six children born to Terri and Daniel McGowan. In her early childhood days, she spent travelling around Europe with her parents. She started her modeling career early after her father made contacts with Italian magazines such as Vogue Bambini. When she was 10, her family moved to United States, where her parents got divorced. Being bought up in Italy, it was hard for her to communicate in English. After her parents were separated, she stayed with her father in Seattle, Washington where she studied in Roosevelt High School and Nova Alternative High School. After graduating from her school, she got admitted in a beauty school and also started working. It was then that she started living on her own, independently. Her late teen years followed earning her jobs in the film industry.

She started her film career in 1992 when she appeared in a small role in the movie Encino Man. Her role of Amy Blue in the comedy movie The Doom Generation (1995) grabbed attentions and also earned her a nomination for Independent Spirit Award. The following year, she appeared in a horror movie named Scream. She also started with Ben Affleck in the 1997 movie Going All the Way. Some other movies that she has appeared in are Devil in the Flesh (1998), Jawbreaker (1999), Ready to Rumble (2000), The Black Dahlia (2006) and Gringhouse (2007). Apart from her role in the movies, she is also a talented singer/ songwriter. She started her career as a model in the music videos of her boyfriend Marilyn Manson’s songs like Coma White and Super Fabulous. Her self-written and recorded song Protection was first featured in her movie Strange Hearts in 2001. She was also the artist who wrote and recorded the theme song for the movie Dead/ Awake, which was released in 2010. Besides that, she has also shown interest in recording an album of her own, singing more soul music and classical music type of songs.

Besides acting and singing, she has also featured as a model for several magazines and covers including the album Shots in the dark by Henri Mancini. She was also the face for the American clothing company Bebe. Her pictures are in the front page of many magazines like Seventeen, Interview, Maxim, GQ, Entertainment Weekly as well as the Rolling Stone. She has also been featured in the Sexiest Women’s list for FHM, Maxim etc.

In the year 2007, she was reported to have suffered deeply in a car accident. The car she was sitting on, hit another car on the way which broke her eye glasses that made deep cuts in her skin. In an interview, she said “I didn’t realize I was hurt until I put my hand to my face and felt the flap of skin. My glasses had sliced me under my eye.” This incident led her to have a plastic surgery, in order to treat the scars on her face. Her pictures of before and after the surgery, can be seen on the internet.

Being a very talented and beautiful actress, she is equally hot in her appearances as well. Her height is 5 feet and 4 inches tall; which is around 163 cm which is not very tall. Her last recorded weight showed that she weighs 44 kg. Besides that, the actress has got good curves in her body that emphasizes her hotness and charmed. Her body measurements read 36-24-35 (Breast- Waist- Hip). Her bra size is 36C which means that she has a big, nice pair of breasts. She also has a long pair of sexy feet that makes her appear even hotter when she is wearing dresses like skirts or shorts. Her exposed legs are also a main reason of her attractive personality. Several of her hot pictures in bikinis and shorts can be seen on the internet. She has also got tattoos of a beautiful girl in a blue dress on her back, just behind her right shoulder.

To know more about her, you can read about her work and career in Wikipedia. Besides that, you can also stay connected with all her latest facts and updates by following her on twitter.