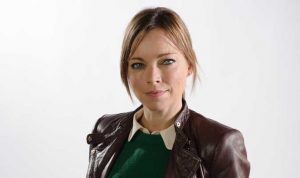 An English actress Sarah Alexander (birth name Sarah Smith) was born in 3 January 1971 (age 43 year) to Frank Smith in Hammersmith, London, England.  Her father was a TV producer and director of factual programs.

In Hammersmith, she attended Godolphin and Latymer School.  After completion of her A level she moved to the Edinburgh Fringe Festival to start her career.  She went Manchester University to attend her first professional acting job. She was married to Peter Serafinowicz . Her husband is an actor and a writer.

This lovely couple has two children; daughter Phoebe Serafinowicz and son Sam Serafinowicz.  Her first child was Sam whom she gave birth when she was 36 and after Sam and Peter welcomed their daughter Phoebe. Sarah is a successful actress.  She played in one of the episodes of BBC comedy drama Lovejoy as Muriel in 1993 and as Bicky in Drop the Dead Donkey in 1994.  She also acted on of Octavio Paz’s only play, Rappaccini’s Daughter.

Sarah did different theatre work. Some of them are, Hand In Hand, The Secretary Bird, Northanger Abbey, Macbeth and The Vagina Monologues. She is also an amazing comedian. She did number of sketch-shows. Her sketch shows include, Armstrong and Miller (1997–2001), Smith and Jones (1997–1998), Smack the Pony (1999–2003) etc. she had also played a French queen in “Stoke Me a Clipper. This was a British science-fiction comedy series.

She appeared in the comedy show The Strangerers in 2000. She co-hosted with Jon Holmes in The 11 O’ Clock Show which is a current-affairs satire related show. In 1994, she acted on Seaview Knights.  From 2000 to 2004, she played a role of Susan Walker in Coupling (BBC sitcom). She was known as a British The Worst Week of My Life, Green Wing. She also played a role in remake of the British comedy series Teachers as Alice Fletcher. In 2007 Sarah’s I Could Never Be Your Womanand Stardust was released.

In 2008 she was stared with Armstrong in BBC drama Mutual Friends and similarly played in All The Small Things as Layla Barton in 2009. She also did The Gobetweenies- comedy series in 2011, 2012 and 2013.  She starred in Me and Mrs Jones in 2012. She was also starred in the BBC One series Jonathan Creek as Polly Creekin 2013. She also appeared as a judge based on Nicki Chapman in a parody of Popstars in 2001 and as Liza Goddard in a spoof of Blankety Blank in2003. Likewise, in a celebrity version of University Challenge that is hosted by Angus Deayton, in 2005. Now, she is writing her own comedy series about journalists with two writers from the Armstrong and Miller production team.

Hot Sarah is 5 feet 4 inch (1.63 m) tall. She is known for her Bright blonde hair. She can speak French as well as Spanish language and likes to ride horse, swim, do karate and playing tennis. Her zodiac sign is Capricorn.