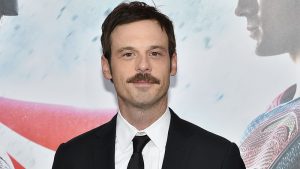 “I want my career to grow gradually. There’s still so much for me to learn. I’m just trying to take these opportunities to get better at what I’m doing.” – Scoot McNairy

Nevertheless, he is a highly acclaimed actor specializing in independent movies as his almost 15 years of acting career has been about exploring different independent movies roles, but now, as of 2014 and his upcoming future, he is coming in attention of mainline directors and producers and thus, many of them want to add the talented actor in their cast. In this way, as of 2014, one may have seen Scoot in supporting roles of handful of critically praised film such as The Rover and Frank.

Data-wise, from 2003 to till now, he has had minimum 3 to maximum six acting projects each year, which showcases his increasing experience in acting and market demand. Given the fact that he is coming up with promising roles in some of the most-talk about upcoming movies of today like Black Sea (2014), Gone Girl (2014) and Batman Vs Superman: Dawn of Justice (2016), his future seems luminous. Also, his acting projects are American, British and Australian i.e. movies of these countries attract viewers in millions all over the world adding up their own massive population.

Thus, Scoot being a cool, fun loving and straightforward country-side lover actor who has many friends inside the industry, he is always trying to explore roles differently given the fact that  his home is situated at  a deep part of Texas in a secret rural town comprising of just 15 people and his closest neighbor are half a mile away. Truly, that’s quite a privacy to donate all the time thinking about films and working on scripts or evolving himself as an actor.

Plus, he has company of his popular, gorgeous actress wife/ diva Whitney Able, who is of conscious, reasonable and adventurous nature. Her first lead role was in the movie Monster in 2010 alongside Scoot. The science fiction movie Monster that was directed by Gareth Edwards as his feature film directorial debut, earned 4.2 million in comparisons to its budget of less than 50,000 dollars.

Since Scoot had already established himself as a low-budget movie pioneer in the independent movie industry after producing and acting in the 2007 successful low budget movie In Search of a Midnight Kiss, the Monster directorial and editing unit could learn a lot from the actor.

Moreover, once would come to realize another interesting fact about the actor when they understand that In Search of a Midnight Kiss, one of the top 10 independent films of 2008, being his breakout film was produced by himself. Nevertheless, he has his own production company as well which is called The Group Films.

“Dyslexic in his childhood, John got the nickname Scooter from his father at the age of two because he was all scooting around on his butt back then. Since he suffers from dyslexia from an early age, he goes to a Dyslexic school for four years, where he gets important lifelong lessons from his teachers to learn with his sense organ namely hands, ears and eyes and forget everything besides learning from these precious organs. As time passes by, growing Scooter finds meaning in the important words of his teachers and chooses his eyes as his life-long teacher while studying at the school.

Slowly, near to teen Scoot finds watching movies highly educational and spends a lot of time daily watching movies in an obsessive manner. After his school days, he chooses theater as his after school program and upon completion of his studies in his early 20’s; he starts his career starring as the teen role of Russell in Wrong Number in 2001, after moving to Austin, Texas. He then moves to LA to get enrolled in a film school to follow his childhood day’s interest of being photographer and cinematographer. Matter of fact, Charlie quits film school in LA after studying for 1 year believing the famous idea “the best way of doing a business is to be in the business.”

Soon, he starts working in film production doing all the behind the scenes hard work from carpentry to building film sets. After that, he gets numerous works in projects as an extra and he works in those projects because of monetary benefit and fun involved. In this way, going to be cinematographer Scoot later gets connected to TV commercial industry and eventually ends up doing over 200 TV commercial.

Soon, he gets convincing supporting roles, special appearance roles to guest appearance roles in various movie projects and television series. In this way, the talented actor crosses decades acting in various movie projects especially earning name for playing characters that are very distinct in nature and even most of his supporting roles are as popular as the major lead roles and that’s the beauty about his acting.

Moreover, he is a slow runner inspired by the proverb “slow  but steady wins the race”, as he is kind of actor who would like to explore different roles and learn about them taking time rather than being popular overnight and suffering from a bad drought after that. But, that doesn’t mean he is slow on set. For the movie monster, the actor along with his then recently met girlfriend and co-star Whitney Able plus cast and crew of the movie visit 18 different cities over the course of 8 weeks during the process of guerilla style shooting of the movie.

On top of all of these information, he has played opposite of superstar Brad Pitt for two times i.e. Killing Them Softly (2011) and Twelve Years a Slave (2012). Nevertheless, he has worked with many popular reputed names in the industry  such as Ellen Page, Michael Fassbender, Liam Neeson , Julianne, Robert Pattinson, Guy Pearce and many more or one can also say that these stars got an amazing opportunity to play alongside Scoot in their respective movies.

Last but not the least, he is equivalently popular in U.S.A  for his guest appearances on hit shows namely My Name is Earl, The Shield, Six Feet Under, How I Met Your Mother, CSI and as a recurring role in Bones.”

Other wiki on his professional life can be accessed via Wikipedia’s biography on him.

Now moving on to his body configuration and physical sex appeal, he is a southern man with appreciable body and a tall  height of 5 feet and 10 inches. If we had to suggest a shirtless scene of the hot actor, we would suggest the lovemaking scene from his recent 2014 television series Halt and Catch Fire with actress Kerry Bishe.

In view of the fact that he is the heartbeat of his gun and bike crazy wife Whitney, he has been successful in creating an awesome chemistry with her, and often, it is heard that they do a lot of boyish things together. Given their impassioned chemistry, their married life is unlikely to suffer from a divorce situation, badluck to Scoot gay fans and Whitney lesbian fans. Furthermore, both of them are enjoing what we call a busy career and thus, it seems like they haven’t pondered much about having children.

Lastly, given the fact that Screen Actors Guild Awards, Ensemble Cast Award, John Cassavetes Award (Independent Spirit Awards) and many more awards winner Scoot is still not known widely in the United States of America, he needs more number of big movie projects and lead roles unlike his past career of a journeyman actor. But, as of now, his career is heading towards a right path.

In three years i.e., 2012, 2013, 2014, he has worked and has been working on altogether 12 acting projects in which at least 5 projects are big name movies like Argo, Killing them Softly, Non Stop and many more along with critically acclaimed independent movies like Dragon Day and hit television series Halt and Catch Fire. And, now, we have been getting rumor that he is portraying the character of speedy superhero Flash in upcoming 2016 movie Batman v Superman: Dawn of Justice. Inarguably, his career seems like quite a journey if we oversee his career and the struggle phase of it plus his probable net worth of more than 30 million US dollars. Surely, he will not be a slow runner turtle in 2016. Congratulations to the rumored Flash!