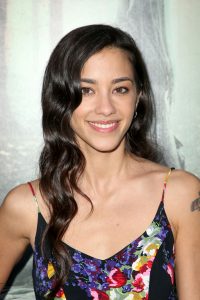 Seychelle gabriel was born on March 25, 1991 in Burbank, California. She is an American actress best known for her work in the movies The Spirit and The Last Airbender. Currently, she co-stars as Lourdes in the TNT series Falling Skies. Her voice is also featured in the animated series The Legend of Korra. She also appeared in independent projects, including the short film Welfare to Love and the educational documentary that exposed the misdeeds of the corrupt tobacco industry, Jeffrey Wigand’s, Secrets through the Smoke. She has a mixed ethnicity of Mexican, Italian, and French. She was enrolled at Burbank High School and graduated from there itself. gabriel also gave time to her voice, guitar, and piano training during her school. gabriel started her acting career at a very young age.

Her parents were Michelle and Guy gabriel. Her father has French and Mexican ancestry and mother has an Italian ancestry. gabriel’s birth name is Seychelle Suzanne gabriel.

In 2008, Seychelles portrayed the role young Sand Saref in the movie ‘The Spirit’. She portrayed the role of Princess Yue in The Last Airbender in 2010. The movie was directed by M. Night Shyamalan, and based on Avatar: The Last Airbender. After this movie, she was also seen as Tina in movie Honey 2 in 2011, which was directed by director Bille Woodruff. In 2009, gabriel appeared as Adelita Reyes in a Comedy drama television series Weeds. She had a recurring roles in the 3 episodes of Weeds including “Ducks and Tigers” (season 5: episode 11), “Glue” (season 5: episode 12), “All about My Mom” (season 5: episode 13). She appeared as Lucy in one episode of television series Miami Medical in 2010.

gabriel’s was nominated for Young Artist Award for Best Performance in a Feature Film and Golden Raspberry Award for Worst Screen Couple for her role in The Last Airbender. She has also appeared on several TV commercials and print campaigns.

gabriel has a slim body with a normal height of 5 feet 3 inches .She has a naturally beautiful face and glowing skin combined with a black hair. gabriel was considered one of the 55 faces of the future by Nylon Magazine’s Young Hollywood Issue in May 2010. Her curvy waist and wide hips makes her body look hot and sexy in whatever dress she wears. She is just 24 years old now.

Regarding her personal life, this actress was dating Mark Jordiolin in 2013. Mark is a model of Calvin Klein underwear. Currently, there is no any rumor regarding her dating and boyfriend.

If you want to know the new updates about her, then you can follow her on twitter and instagram as well as like her page in Facebook. We will also be updating her new wiki. Please don’t forget to log on to our site https://unapix.com/. Her short biography can also be accessed via wikipedia and imdb.