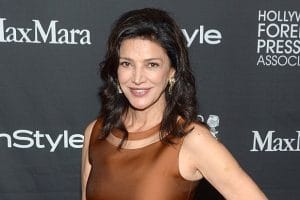 “Cinema is a reflection of its own society.” – Shohreh Aghdashloo

Internally famous Emmy award winning actress and Academy Award nominee Shohreh Aghdashloo earned a reputation of one of the emerging actress in Iran during 1970’s with appealing roles in the critically acclaimed Iranian movies such as Shatranje Bad (her first released feature film, 1976) , Gozaresh (her first feature film debut, 1977)  and Sooteh-Delan (1978).

Nevertheless, she is a periodical tv shows actress who has worked shortly in various reputed television series.Most accurately, her best known television role is from the television show House of Saddam (2008) for which she won an Emmy.

Born on 11 May 1952 in Tehran, Iran to a wealthy Muslim family, young Shohreh couldn’t understand the various systems that were prevailing in her country. Moreover, she couldn’t understand inequality between men and women neither she could understand government imposing authority in the name of religion. Being an educated teen, Shohreh bravely decides to give life to her acting interests. At the age of 18, she starts her acting career in Iran.

And, for two years till the age of 20, she enjoys acting as a stage actress. At the age of 20, she decides to join a drama workshop that promises numerous young bloods like Shoreh to teach acting skills and at the same time earn valuable work experience. While she was coming to the workshop everyday as a passionate student, she was being watched by a famous screen-writer, who later helps her to join the mainline movie industry despite her unconventional looks and short height.

Unfortunately, Gozaresh (The report) and Sooteh-Delan (Broken Heart) gets banned in Pahlavi dynasty ruled Iran even before their release date but both of the movies screens at various film festivals worldwide. In the year 1978, she portrays the heart-touching role of a prostitute named Aghdas in Ali Hatami’s Sooteh Delan (Broken Hearts).

During the 1979 revolution in Iran, she decides to leave the country in order to pursue her career in acting and acquire greater acting experience- as she wasn’t happy the way the government had not been regulating the acting industry nor she was happy about the way women were treated inside the country. Assuming she will never be treated as a first class citizen in her own country, she escapes Tehran and goes to United Kingdom while Iran goes through the revolution. In the process, she had to travel through various countries such as Turkey, Ugeslovakia, Italy, France and Paris to finally arrive in the United Kingdom.

Born and raised until 25 years in Iran and later, banned from the country for fighting as a human right activist, middle eastern beauty Shohreh earns a Bachelor degree in International Affairs while her stay in the United Kingdom. Then, she moves to Los Angeles to get closer with Hollywood.  Actually, what makes her to stay in the United States of America besides its open society and developed acting industry was her love for Iranian actor/playwright Houshang Touzie, with whom she falls in love – upon being impressed by his plays, and later, she gets married with the genius playwright in the year 1987.

They have a daughter together and she is probably a grown up now.  Anyways, the couple is enjoying their life in the United States of America as a happy family. Plus, Shohreh has also worked in several of internationally famous Touzie’s plays.?Furthermore, no other rumos regarding her husband, children or divorce are present on the media.

The 5 feet and 4 inches tall cheerful Persian beauty Shoreh enjoys a fit hourglass shaped body with body measurements of 38-26-36 inches. Now, at the age of 62, she looks like someone on her 40’s . Matter of fact, she is known for her husky voice, toned legs, cheeky face and charming smile. Plus, her accent is flawless and hot. Furthermore, her net worth is not known but it can be guessed around 15 million US dollar approximately.

Moving on to her social networking site presence, she doesn’t have a twitter or Instagram profile. This proves that she is not a great fan of social networking. However, the sexually confident bluestocking Shohreh is more into visiting places and collecting arts and jewelries, but not expensive ones.

Moreover, beside her major profession, she teaches acting and has published her autobiography namely “The Alley of Love and Yellow Jasmines” in the year 2013. Plus, she is a human right activist, and interesting news for video game fans- her voice has featured in video games namely Mass Effect series and Destiny. Last but not the least, her upcoming movie Septembers of Shiraz is one of the highly anticipated movie of 2014.

Other wiki on her professional life can be extracted from Wikipedia and IMDB’s biography on her. ?Furthermore, no other rumos regarding her husband, children or divorce are present on the media.