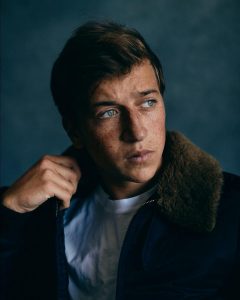 “Mom: Skyler, you can’t eat Taco Bell at 10:30 in the morning. Me: Well not with that attitude, you can’t.” – Skyler Gisondo and his mom conversation, Source: Twitter.

Born on July 22, 1918, American teen actor Skyler Gisondo is responsible for supplying the American on-screen industry with memorable roles such as the brainiac kid Bryan Pearson who is fond of strange aspects of the world in the American sitcom The Bill Engyvall Show, which is based on a story of a couple struggling everyday against parenting issues in today’s materialistic and crazy world, and psychologically afraid kid Tommy Doyle in the 2007 reboot version of one of the most famous American horror franchise Halloween.

Spiderman’s love interest Gwen Stacy’s brother Howard Stacy in The Amazing Spiderman series and Ben Stiller’s character Larry Daley’s son Nickey Daley in Night at the museum: Secret of the tomb, Skyler is a fine teen with unmissable cute looks and fit body. It is no surprise that he represents the new generation of American actors, the new breeds one might call them, who are much more influenced towards the emerging pop culture than any other generations.

He loves social networking(although he joined twitter just in 2013), taco bell, working out, baseball, sleeping, eating, partying and many other fun activities, and hates when someone behaves stupid and lame.

Even though his exact height is not revealed on the media, his height can be guessed to be in the range of 5 feet 5 inches to 5 feet 6 inches by analyzing his pictures with Ben Stiller who is 5 feet and 6.5 inches tall.

Born to Jewish parents in Florida, Ben is proud of his ethnic background and describes himself as an Jewish American. Now, moving on to his dating life, he is probably dating his gorgeous and fun loving Jewish girlfriend Hillari Levine, hard luck for his gay fans.

Hilariously, he asked Hillari to be his prom partner literally carrying his wingman, the Night at the Museum notorious monkey on his head and holding a red rose with his right hand , and his parter in crime were no other than his friends Ben Stiller and legend Robin Williams.

The fun fact  is Hillari couldn’t ignore such a hard work of the trios and said Yes. How did he manage to propose the love of her life in such a unique way? People may wonder.

Simply, it was a video proposal, and the video even got posted on Youtube in May of this year. Moreover, the video has been emotionally attaching itself with large number of people, as it is one of lthe last on-screen appearances of the deceased legend Robin Williams. One can check out the video via Youtube.

With films like The Amazing Spiderman 2 and Night at the Museum: Secret of the Tom in 2014, and one of the anticipated movie Vacation on the line for 2015, he is definitely one of the aspiring teen actors of the United States of America as of 2014.

Lastly, he has also appeared in various reputed television shows, although his television roles are episodic, he has got enough potential to be the next big television actor as well.

On an ending note, one can keep in touch with the talented actor via his Twitter and Instagram accounts. If one is having issues, while searching his shirtless and couple pictures online, the person will be suggested to visit his Twitter account, where he keeps updating his life events. His twitter tweet id is @SkylerGisondo, and his Twitter description is given as:

“Semi-Professional wrestler, burrito enthusiast, actor, and bear wrangler. Not necessarily in that order.”