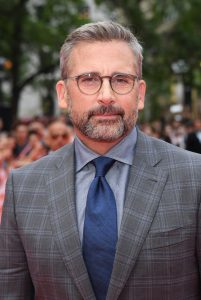 Talented American actor, director, producer, comedian and writer Steve Carell was born in August 16, 1962. He was born to an electrical engineer father Edwin A. Carell and a psychiatric nurse mother Harriet at Emerson Hospital in Concord, Massachusetts. He is the youngest of four brothers. Carell is of Polish, Italian and German decent. Carell was brought up as Roman Catholic. He attended Nashoba Brooks School, The Fenn School, and Middlesex School. During his school days, he was good in his studies and other extracurricular activities. He was very good in ice hockey in his school days and played fife very well. In the meantime he joined reenacting. Carell attended Denison University situated in Granville, Ohio from where he earned a degree in 1984 at the very young age.

He began his career by working as a mail carrier in Littleton, Massachusetts. He had to quit his job after six months just because his boss told him that he wasn’t very good as a mail carrier. In his early days, he acted on the stage in a touring children’s theater company. Later on he appeared in a television commercial for Brown’s Chicken and in the comedy musical, Knat Scatt Private Eye in 1989. In 1991, Carell performed with Chicago troupe The Second City. In the same year, he debuted in film in Curly Sue with a minor role as Tesio. He was a cast member of short-lived sketch comedy program on ABC named The Dana Carvey Show.  He provided voice to The Ambiguously Gay Duo on Saturday Night Live as the voice of Gary. He also has played supporting character for several series like short-lived 1997 Tim Curry situation comedy Over the Top and Come to Papa. Carell has made several guest appearances in different shows like Funny Girl, Watching Ellie and Woody Allen’s Melinda and Melinda. From 1999 to 2005, he was a correspondent for The Daily Show. He signed a deal with NBC to star in The Office in 2005. For his Office role, Carell won Television Critics Association and Golden Globe award during 2006. He was also nominated for six Emmy award for his work in the series (2006–2011). He also has written two episodes of The Office: Survivor man and Casino Night. Due to his good work, he won a Writers Guild of America Award for “Casino Night”. Then he left the show in order to focus his film career.

In 2004, he was seen in hit comedy Anchorman: The Legend of Ron Burgundy. Soon after he created a film named The 40-Year-Old Virgin with Anchorman producer Judd Apatow. It established him as a leading man and made $109 million in domestic box office sales. He also earned WGA Award nomination and MTV Movie Award for Best Comedic Performance. In 2006, he starred in Little Miss Sunshine as Uncle Frank. Carell was asked to join the Academy of Motion Picture Arts and Sciences. In 2008, he played Maxwell Smart which was the remake of Get Smart. Carell plays real-life Olympian John Eleuthère du Pont who has schizophrenia in the 2014 dramatic film Foxcatcher. His performance has leaded him for a nomination of the Academy Award for Best Actor.

When Carell was teaching at Second City, he met Saturday Night Live alumna Nancy Carell. He is married to Nancy Carell. He has good marital relation with his wife so he is unlikely to get divorce. He has two kids. He is happily living with his children and whole family. He earns a handsome salary and has $45 million net worth.

Fifty one years old Carell is a talented actor with wonderful height. He is 5 feet 9 inches tall. But there are many rumors about him regarding hair transplant. They say that he uses hair plugs. He is a popular media personnel who has given many hit movies. He has many fans and admirers. We can find his biography in wiki and his personal sites. One can also follow him in twitter.