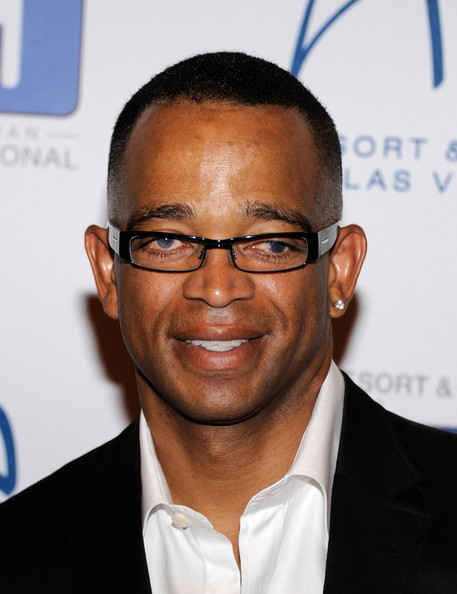 Stuart Scott is born on July 19, 1965 (age 48, height 1.82 m) in Chicago, Illinois, USA.  By profession he is a sportscaster and anchor on espn’s Center. In 1987, Scott Graduated from the University of North Carolina with a Bachelor of Arts in speech communication. He is a member of Alpha Phi Alpha fraternity.  Scott worked as a reporter at WPDE-TV in Florence, South Carolina, (1988–1990 ) and at WRAL-TV 5 in Raleigh, North Carolina, from 1990–1993.  Formally, Scott joined ESPN2 at the networks as the host of Sports Night. He currently works for the espn family of networks as an anchor for Sports Center episodes as well as National Football League and National Basketball Association programming. Scott has been the host of a number of television shows. His NFL work includes NFL Matchup, NFL Live, NFL Primetime, and NFL Countdown, while his NBA work includes hosting the NBA Finals and NBA Fast break.  He has been married to Kim since March 1993. They have two children. Scott lives with his two daughters in Avon, Connecticut. There are no other details about his marital life (divorce or not)with Kim Scott to any media. His marital life, wife and his relationship with her are unknown. There are a few news about him being separated from Kim and Kim stays with his daughters in his house in Connecticut. However, there is no official announcement of any of this news.

Stuart Scott is a real life fighter.  In April 3, 2002, he met with an accident.  He suffered from eye injury. He was injured in New York Jets mini-camp when he was doing a special for espn. He underwent surgery that night and was out of work for a few months. On November 26, 2007,  he had an emergency appendectomy in Pittsburgh after becoming ill while covering the Pittsburgh Steelers–Miami Dolphins Monday Night Football game. The surgery also discovered a malignancy. He has been fighting cancer since 2007. He managed to successfully remove all the cancerous tissues but yet had a remission in early 2013. He revealed the cancer diagnosis in a series of twitter messages last year, telling followers he was ‘back in the fight’ but that he would battle with ‘all C survivors &loved ones’. Scott is battling appendiceal cancer illness for the third time since his first diagnosis in 2007.He has endured 58 chemotherapy sessions and 3 abdomen surgeries. But the father-of-two does not want to know the severity of his condition and continues to go to work and train at the gym. He approaches this fight with passion and energy all the time and never behaved as a sick person.  Even though each bout of cancer has hit him harder than before, he has continued to work on ‘SportsCenter’ on espn, much to the surprise of his colleagues.

Stuart Scott is a sportscaster with a net worth of $15 million. Stuart Scott made his net worth from hosting sporting events and game shows. His annual salary is $2 Million. The info related to booyah is not clearly opened by sources. He spends his off-air time working out with martial arts and cross-training and hanging out with his daughters, 14-year-old Sydni and 19-year-old Taelor, who is now at college.  This survivor is happened to be an inspiration for all other cancer patients.  Hats off to Mr. Stuart Scott!!! Nobody in the sports community has been more public and more fearless with their cancer treatment than Scott. He’s still standing and millions of people around the world who are fighting the disease too now have a jubilant and jovial leader for their battle. More info can be found on wiki.

Stuart Scott was born in . Stuart Scott is Sportscaster by profession, find out mroe facts, education, weight, and more.