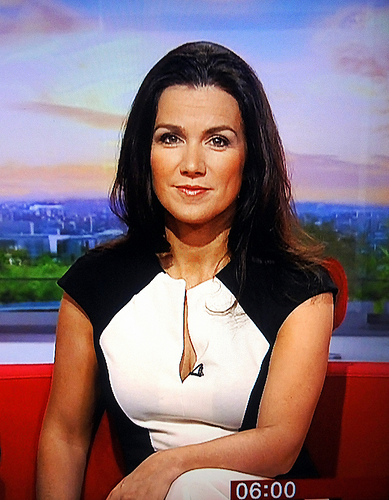 Enjoying her forties, Susanna Reid will have to go through two challenges in 2014 at the same time. Her first challenge would be successfully co-hosting the show from the 80s “Good Morning Britain” on ITV and the second challenge would be living without her long-time best friend/partner, Domini Cotton, who is also the father of her three sons.

The list of popularity representations and awards she is getting can be queued by a long –long line. While she was studying politics, law, and philosophy at the University of Bristol (1989-1992), the university’s student magazine called Epigram gets short-listed in the reputed “The Guardian/NUS student journalism award” as the “Best Student Newspaper of the year” in 1991, when she was the editor.

In the year 2013, the famous web-portal AskMen.com lists her 40th in the list of 99 Top Women in the UK showcasing her popularity and “sex symbol” image in Britain.

Also, she is one of the Zoo Weekly’s top ten of ‘Britain’s sexiest mums’, and just in 2013 she got in 96th place in FHM’s ‘100 sexiest women’ list plus she gets awarded by  the Television and Radio Industries Club as “Newsreader of the year” in  2014 just after the week she decides to go to ITV for  £1 million salaries per year to host the show “Good Morning Britain.”

Before joining ITV, Susanna was mostly known for co-anchoring the popular BBC morning breakfast show “BBC Breakfast,” which has about 1 million more viewers than the ITV’s breakfast show “Daybreak.”

Susanna’s significant popularity factors on the BBC Breakfast sofa would be her natural “spur-of-the-moment” behavior and her girl next door-like character. The fact we know is that she left BBC as a celebrity after working for it for 20 years, and not many popular anchors that left BBC to go to ITV have seen a stable career in ITV. People speculate that it’s all about £ for the modern anchors to exit the job they are doing well at and that may be true as well.

But, it’s a time for her to celebrate because of the new huge salary scheme she is getting from ITV management. She is an interview d  tells me she has taken this job on ITV as a challenge. In the coming days, one she what the future unfolds for her but now, she has another challenge except hosting the ITV show, and that is living life without her long-time partner, Domini Cotton.

She was never married to Domini Cotton but sill they have three sons together.  People shouldn’t be confused thinking about why they didn’t get married. They were ok with the type of relationship they had because they were dating even though Susanna was a commitment-phobic.

She has also said in an interview that she was commitment-phobic until she met Dominic. They were never married, so the idea of legal divorce cannot be enforced in this case.

But, they indeed broke up in 2014.  People are surprised at the end of their 16 years of the relationship as there are no details in the media about why and how they broke up. The reason for their breakup is said to be because of the dancing program on BBC called “strictly,” which made Susanna a big star in Britain.

She focused on the show too seriously and even advertised herself on her Breakfast show sofa. Indeed, she went to the show to win and most of her performances “strictly” made her one of the hottest personalities in Britain. She couldn’t win, but she and her dance partner became runner-up competition.

Once, in a show on BBC breakfast, she accidentally shows her underwear to the public while crossing her legs on the sofa. Moreover, critics have also criticized her because of her dress choice for the show, especially for choosing short dresses that allow cleavage of her thighs and breasts.

Moreover, the flirtatious interview of her with 15 years junior Arctic Monkeys front-man Alex Turner drew a lot of criticism and media buzz. Anyway, the breakup of Susanna and Dominic is taken as one of the classic examples of the “Curse of strictly”, as “purely” has seen many couples split up.

Dominic’s profile on the dating site Match.com states he is “currently separated” and he is looking for a woman between 35-and 45. A part of his profile on Match.com which we would like to share

‘I enjoy sharing things and am someone who doesn’t shy away from commitment. Life is for living with someone special.’

Susanna adores Dominic despite the breakup and has said in an interview that if it wasn’t for the support, Dominic provided to her, she would not be successful like she is today and he is a way better parent in comparison to her. It is also said before the breakup, Susanna asked for a chance from Dominic to work out things between them, which he smoothly refused.

During her shows, she wears a tight open up-skirt with or without stockings and tops with some cleavage of her breasts.

Either way, her dress up and her personality makes her the sexiest of the sexiest women on television. She is 43 years old age but looks gorgeous. She has a good height of 5 feet and 4 inches with beautiful and hot legs and thighs.

She was born in Corydon, South London to a Scottish father and an English mother on December 10, 1970. Her nationality is British and her ethnicity is Scottish and English. She holds a post-graduate diploma in Broadcast Journalism from the Cardiff School of Journalism.

She was an actress in her adolescence appearing in a stage production of Agatha Christie’s Spider’s Web (1982) with Shirley Field, and then alongside Pete Barkworth and Harriet Walter in The Price (1985) on Channel 4.
In 2014, as we know, she moved from BBC (which culture is more like a civil service job) to ITV (which culture is more like a Premier League Football Team).

Many people believe that she would be better off at BBC, but for her, this is a new challenge just like it was a challenge for her working on BBC Breakfast, where she used to travel for 5 hours from her home to the BBC studio to Manchester to present the show.

She indeed has successfully overcome every challenge she has faced till now, and it will be interesting to see how she would do on ITV along with anchor from SkySports Ben Shephard.

Prominent works of her career include  BBC’s Sunday Morning live(2011-2012), BBC’s New Year live (2013), BBC Radio Bristol, Radio Live 5 as reporter and producer, BBC News 24, BBC News Channel, BBC Breakfast, BBC News Channel, BBC’s coverage of 2009th and 2010th Oscars and BBC’s Strictly. She has proved that age wouldn’t be much of an issue if one is dedicated to fulfilling his/her dream.

She has established herself as a strong mother and indeed a real journalist. Her fans hope that lovely and sexy Susanna would find a handsome boyfriend or a dashing husband soon. But, it is for sure that, currently she is healing from the end of her affair with Dominic.  You can know more about her from her Twitter page, Google, Wikipedia, and YouTube.