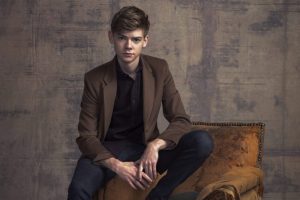 Thomas Sangster is a well-known English musician and actor who was born on 16 May 1990. He is well known for his performance in Game of Thrones as Jojen Reed, Sam in Richard Curtis’s Love Actually, a doctor who, and his voice as Ferb in Phineas and Ferb.

Sangster was born to his parents Tasha Bertram and Mark Ernest Sangster in London. His father was a musician and film editor. Sangster was very much interested in acting since his early days.

He also loved to play guitar and many other musical instruments. Sangster also learned to play the guitar from his left hand for his role in the feature film Nowhere Boy. He also was good in his studies and sports.

Sangster began his career at a very young age. His first role was in a BBC television film, Station Jim. Soon after that, he appeared in a few more television films which include The Miracle of the Cards, Bobbie’s Girl, and Stig of the Dump.

In the meantime, he appeared in Entrusted for which he was awarded the “Golden Nymph” award at the 43rd Annual Monte Carlo Television Festival.

Sangster’s first major theatrical film was Love Actually where he played Liam Neeson’s stepson. For his role in this film, he was nominated for a “Young Artist Award” and “Golden Satellite Award”.

His next appearance was in Tristan and Isolde where he played a younger version of James Franco. Soon after this, Sangster appeared in the commercially successful film Nanny McPhee playing the eldest of seven children.

In the year 2007, Sangster presented himself as schoolboy Timothy “Tim” Latimer in Doctor Who and guest-starred in The Bride of Peladon and The Mind’s Eye.

In the same year, he voiced Ferb in the film Phineas and Ferb. As of December 2007, he was found working in the television series of the story of Pinocchio which was filmed in Italy.

At the end of March 2008, Sangster started working with director Jane Campion on her film Bright Star with Abbie Cornish and Ben Whishaw where he portrayed John Keats.

In March 2009 Sangster joined director Sam Taylor-Wood’s film Nowhere Boy. Right after this, with the role of Casey, he appeared in the film Some Dogs Bite.

Similarly, he appeared in an Irish film, Death of a Superhero with Andy Serkis. He also had a guest appearance in an episode of the British detective drama Lewis as Adam Douglas.

In the same way, his performance includes The Last Furlong, The Ugly Duckling, and the HBO series Game of Thrones.

The hot and dashing actor Sangster hasn’t revealed much about his personal life, relationships, and affair. He has exposed his dating history neither has shown his girlfriend to the media and his fans.

A talented young actor can maintain privacy in his relationship status. Sangster has a hot body with wonderful height. He is extremely handsome and intelligent. Sangster has a height of 1.79 m tall.

Within a very short period, Sangster can make him establish himself as a successful actor with his hard work and dedication. Till the year 2014, he has appeared in many movies and television series.

Sangster can earn a handsome salary and has an incredible net worth. His fans can find him on Twitter. His pictures are daily posted on Instagram.

Some of his shirtless pictures are posted on different gay sites which makes him very embarrassed. More about his bio can be found on the wiki.