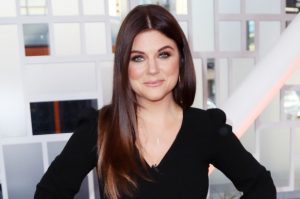 A popular model, who has already won Miss Junior America of 1987, teen magazine “Great Model search of 1988, Cover Girl Magazine’s model of the year of 1989 when makes début on television sitcom, Saved by Bell as Kelly Kapowski, the world notices her. She proves her talent and becomes a notable figure in television industry.

Yes, we are talking about Kelly Goddess of the 90s, Tiffany Amber Thiessen who was a young sensation of 1990s. The show portrays Kelly Kapowski character as sweet “good two shoes” type of girl and Tiffny does well justice to the role. Saved by bell was a show focusing on teen culture of 1990s more in a comedic style.

During the time, Tiffany was a teen sensation in America and her role Kelly was an idol for teen girls back then to such extreme level that teen girls of that time wanted to be just like Kelly when they joined high school. The trend of being like Kelly is also known as Kelly trend. The role of Kelly made her so popular that she got awards, shows and movies intensely. After some rapid success, she established herself as a sex symbol in the industry for almost 20 years.

Here recent ongoing work include White Collar’s Elizabeth Burke and recurring voice in Jack and The Never Land Pirates. You can follow on her works and career on Wikipedia in more detail later. After the birth of her baby daughter, Harper Renn Smith in 2010, Tiffany feels like she is on pressure to stay slim as an actress because of importance of good curves and slim weight in Hollywood.

She works hard for a year to recover to her original weight trying yoga, weight training classes, pilates, running, or everything means she finds possible with less stressing and notable support from her husband. She says in an interview in 2011 that she and her husband will like to expand the family but will not expand until one or two years because she will like to work for couple more years. She also shows super concern about her baby and even states that she will not put perfume when she is around the baby.

In an interview, she gives famous comments about her view on her weight.  On the question asking the ex-sex symbol of USA about the pressure she got after her pregnant period till now. She answers genuinely saying, ‘I think any time you are on a hit show as a young actor or actress, you feel that way. ‘Then as a woman, there’s some additional pressures you feel to look a certain way and be a certain size. I was not the girl that was a size 2 and didn’t work for it.

People admire the work, the 40 years old actress has done to stay fit as well as handle her personal life equally.  When she was modeling, many people regarded as a woman having the most perfect breast in the world. In the line of those people, first expressing his thought to Tiffany was Howard Stern, an American multi-talented personality. Now, she is on her 40’s and she may not have that perfect effects in her boobs that once she had when she was a sex symbol in America, but we must admit she has done a lot of hard work to keep up her figure and her two precious assets still looks delicious.

Now it’s time for her measurements. She was once a popular model and a sex symbol. One will expect a good measurement and slim body configuration from her. And she has been able to fulfill those expectations. Her bra size is 34c , waist is 26 inch, hip size is 35 inch, her breast (implanted)  is 37 inch.  She has an average height of 1.65 meter with beautiful meaty legs.

I am not an expert on measurements but I know this much that these are pretty much good figure for a woman of 40 years. Talking about her hairstyle, she has past shoulder length  waivy hairstyle which is brown and somewhat highlighted with golden color. She only switches to other hairstyles if her work demands her.  You can watch her hot photos and sexy scenes all over internet.

I would probably suggest YouTube and Wikipedia for that. Just reminds me of the statement I wanted to make at the first paragraph but waited for the ending.

I wanted to say it’s a ironic situation now. When her first nude cover picture came out, it got banned and now people can’t even see her opening her jogging trousers. She was a sex symbol back then and now she is a mother and a wife as well as an idol and renowned actress of Hollywood. Perhaps, sex is just a part of life and indeed an important one but it’s not everything. So, people shouldn’t make too much deal out of it. You need to evolve as a person. That’s what I learn from the story of Tiffani.