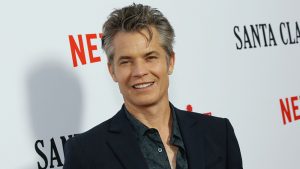 Timothy Olyphant is a successful American actor who is best known for the role of Seth Bullock in TV series Deadwood. He is also popular as Raylan Givens from the series Justified. He was born in Hawaii in May 20, 1968 and raised in Modesto California.

In his early age, he is a good swimmer. At high school as well, he took serious training and became nationally ranked swimmer. To pass his majors, he studied fine arts. He later joined to study acting to persue his master degree in New York City. He took acting classes for 2 years with William Esper.

He began his career in 1995 as he made professional debut in “The Monogamist” in the role of Tim Hapgood. For this performance, he won Theatre World Award for Outstanding Debut Performance. Then, he appeared in the play “The SantaLand Diaries.” After working in theatre, he got job offer from the television. He started with the role of pilot in “77 Sunset Strip”. He was also the cast member of “Mr. & Mrs. Smith” in 1996. During those periods, his performances were well received by the viewers. So, he appeared in many TV series at that time.

He made his debut in feature film in 1996 from the movie “The First Wives Club”. He gained more notice of the media from the horror movie “Scream 2” in 1997. During his career, he has played many different characters. His most popular movies are “Hitman”, “I Am Number Four”, “A Perfect Getaway” and “Rango”. From the movie “A Perfect Getaway”, he was also nominated for Toronto Film Critics Association Award for Best Supporting Actor. He was also considered as the role of Tony Stark in Iron Man in 2008. His most popular TV series are “Deadwood” and “Justified”. From “Justified” he has been nominated several times for different awards from 2011 to till today.

Because of his daily workout, he did not seem to be looking old though he has just stepped at the age of 46 from 2014. He is known for his unusual posture. Despite the fact that he is very popular and achieved the height of success, he was married before beginning of his career. His wife is Alexis Knief and they were married in 1991. The couple has 3 children. Olyphant is very caring husband and the father. So, he gives more time to his wife and the kids as possible as he could. Because of this reason, we can say that their relationship will not end with divorce and definitely, he is not a gay. Currently, he lives in Westwood, Los Angeles with his family.

This handsome stud is 6 feet tall. Because of his daily walk and workouts, he has maintained his body properly. His shirtless pictures are continually roamed in the web. Though there were some rumors that he is having an affair with his co-stars, he commented in an interview that they were all false. Though his hair color is slightly fading these days, his number of followers has not decreased. He is very popular in twitter with large number of followers. In 2014, he has the net worth of $10 million.

To get more information about his biography, you can visit wiki and other related sites. But do not forget https://unapix.com/ for the update of information of celebrities. You can view his interviews in YouTube as well and can also follow him through Twitter.