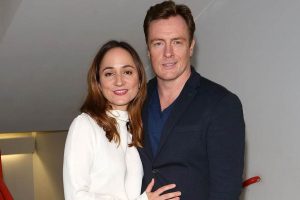 In an interview with express.co.uk in 2014, he states that his perfect Sunday would undoubtedly be spending time with his wife and children. According to the London native, it is awesome to get back to home especially after working long days overseas. He says his family reminds him of the fact that there are other things important in this world more than him. And, when the journalist during the interview asks him about the most expensive thing he has ever bought, he simply says – “a necklace for my wife. It looks great on her.”

Who is the lucky wife? You may be wondering.

His wife is no other than the towering 42 years old New Zeland beauty Anna-Louise Plowman. Surely, hubby Toby has more sophisticated career than Anna. But, a loving mom to three children, Anna as an actress has also earned quite a reputation for herself acting in reputed on-screen projects such as Stragate SG-1, Holby City, Cambridge Spies, Three Tall Women and Doctor Who.

You have got to hand it to the couple for the way they have balanced their personal and professional life till now. It seems like they never judge each other career or developing any sort of feeling related to jealousy. That’s why they have also earned loads of popularity working as on-screen couple in the likes of Private Lives, Chichester and Cambridge Spies.

Toby and Anna have been married for near to 15 years as of 2015. They have zillions of love for each other. The couple not only respects each other, but also understands each other inner self.

Now moving to the actor physical orientation, he is a tall man with the height of 5 feet and 11 inches. Although Anna and hubby Toby are of same height, Anna looks taller than Toby in their combined public appearances because of her high heels. Moreover, Toby is a well build up man whereas Anna has a sizzling slender figure. She is probably a banana shaped. However, neither Anna nor Toby exact weight is known.

Nevertheless, the couple enjoys a high net-worth. Unfortunately, their respective net-worth is not known. However, the couple combined net worth can be guessed to be in the range of 10 million to 20 million US dollar.

The main antagonist Gustav Graves of Die Another Day, Toby Stephens is the son of reputed actors namely Sir Robert Stephens and Dame Maggie Smith.  An alumni of Seaford College, and praised pass-out of London Academy of Music and Dramatic Art, Toby didn’t had a best childhood as his parents divorced when he was just four. However, his mother brought up the two sons very well. Toby’s brother Chris Larkin is also a reputed actor.

Last but not the least; his fans can connect him via social networking sites like Twitter, Facebook and Instagram. Also, to get more info about his personal life, one can view his Wikipedia and IMDB biography.