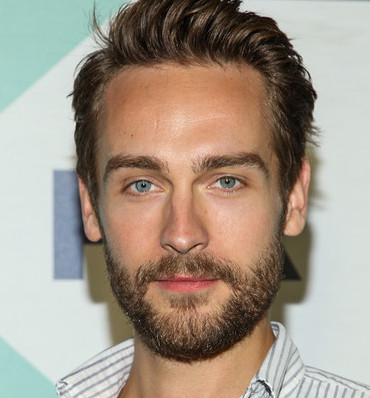 Ichabo of the American supernatural action- horror-drama Sleepy Hollow, English actor Tom Mison is a married man as of 2015. Then 31 years old Tom married his girlfriend Charlotte Coy in this spring 2014.

Tom and Charlotte mutually preferred a low-profile wedding. Not surprisingly, their rep confirmed the wedding so late, i.e. after 1 months.

It seems like they didn’t wanted to follow conventional methods of getting marriage, and they ultimately chose to have an outdoor wedding.

Although the exact location where the wedding took place is not known, we know that both of the stars family and friends were present at the wedding. If we take the words of insiders, it was a simple wedding comprising smartly designed venue.

From what we have heard, Charlotte is an ex-actress who is now exploring her artistic side by selling vintage items. Her company The Dotty Pigeon is genuinely getting popularity as a progressing firm in London. Nevertheless, Charlotte is a person who loves to eat.

Furthermore, no other info about Charlotte is known. But, no worry, we can always talk about Tom past relationships, and Sleepy Hallows. Shame plus The Amazing Mrs Pitchard.

Now, Believe it or not, Tom dated English actress Carey Mulligan for about three to four years.  They broke up probably in 2009. After Tom, The Great Gatsby actress Mulligan dated her Wallstreet:Money Never Sleeps co-star Shia  LaBeouf from 2009 to 2010.

Later. Shia revealed that his relationship with Carey ended because of many reasons, but the most prominent one being Carey eagerness to settle down and start a family.

Now, Carey is married to the lead singer of Mumford & Sons namely Marcus Mumford.  Also, Shia in an interview in 2012 said that he would like to get married one day, but not at this point of his career.

So, don’t be surprise, if you see Shia’s name with other actresses. But, don’t expect him to settle down as he knows what he wants from his life.

Anyway, the actor should control his drinking habit to not let happen shameful incidents such as “Cabaret incident” again.

Anyway, his 21 years old girlfriend Mia Goth has been very supportive regarding his alcohol treatment program after the incident. But again, Will he commit to Mia?

Moreover, Shia even has had experience of dating in-relationship actresses.

Now, again moving back to Tom, it is rumored that Carey broke up with Tom to date Shia back in 2009. Although this rumor can’t be verified, what we can verify is Tom and Carey dated in the past.

There are plenty of pictures of the two if you want to view them. Anyway, another rumor project that the real reason why Carey and Tom broke up was Tom unwillingness to move to New York back then.

Carey is Tom costar in The Amazing Mrs Pritchard (2006). Moreover, Tom has deleted all of Carey related tweets from his twitter. Probably, he did so because he wanted to forget the past and move on.

Furthermore, people believed that Tom dated his Sleepy Hallow co-star Nicole Beharie from 2012-2013. It’s true that they have an awesome off-screen bonding and good on-screen chemistry. Because of their good chemistry on the show and Sleepy Hallow interviews, people began to speculate that they were dating.

Such die heart Sleeply Hallows fans surely got happy when they heard about Tom marriage with Charlotte.

To put it simply, Tom and Charlotte were never a couple. But, they are much more than a couple. They are like besties to one another. They have a mutual tendency to respect one another sense of humor. Also, they like to give one another friendly advice.

For refrence, Tom told Nicole to move on, and not stress thinking her past unsuccessful relationship with Michael Fassbender. Nicole and Fassbender met on the set of Shame probably in 2011. However, they only started dating from the year 2012.

And, in 2013, the Abbie Mills of Sleepy Hollow announced her breakup with Micheal via twitter. People were astonished by the way Micheal and Nicole loving relationship ended. At last, people had no choice to assume that Michael and Nicole broke up because of their long-distance relationship as Michael lives in England and Nicole in New York.

Moreover, the interesting fact is Tom ex-girlfriend Carey was Nicole co-star in the movie Shame.

Anyway, now moving on to Tom’s body orientation, he is a tall English man with the height of 6 feet and 1 inches.  His weight is not known, but judging by his pictures his body is awesome.  His age is 32 as of 2015, and he was just 22 when he started his career via theatre.

Now, he is a celebrated actor best known for his roles in tv shows such as Sleepy Hallows and Parade’s End, and movies such as One Day and Jadoo. Moreover, his ethnicity is not known.

And, talking about his shirtless pictures, Google Picture Search is where you can find his Sleepy Hallow shirtless pictures. And obviously, he has a good number of gay fans as well.  It seems like he supports marriage equality, and yet that doesn’t mean he is a gay.

If you don’t know, the show Sleepy Hallow is one of the many adaptation of the 1820 Haloween short-story “The Legend of Sleepy Hallow” by a famous19th century author namely Washington Irving. The shows also gets some of it’s concept from another book of the author namely d “Rip Van Winkle”. So if you are a amdist fan of fiction stories, Amazon is giving you free audibles of the book “The Legend of Sleepy Hallow” narrated by Tom Mison himself. So, don’t miss this chance. Anyway, in the book, you would surely not find any reference to either Mooloch or  supernatural soilders. For that, you have to go through the other book.

Last but not the least, the theatre, movie and television star has net worth around 5 million US dollars.

Tom Mison was born in . Tom Mison is Actor by profession, find out mroe facts, education, weight, and more.