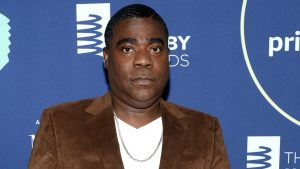 Tracy Morgan is the famous American actor and comedian who has shown his capabilities in Saturday Night Live and in TV series 30 Rock. He was born in November 10, 1968 in The Bronx, New York. He is actively involved in musical comedy, cringe comedy as well as character comedy. He has started his career from 1992.

He has played for the first time in Martin where he played the role of Hustle Man. He starred in the film Head of State in 2003 as a role of Chris Rock. As he is also the television actor, he also appeared in Uptown Comedy Club from 1992 to 1994. He was also on the HBO show Snaps in 1995 and also on Def Comedy Jam. He is one of the versatile actors who has played different roles in various movies and TV series. He has made notable impression on the roles such as Aretha Franklin, Mr. T, Tito Jackson, Star Jones and Thomas Jefferson.

He wrote his autobiography “I Am the New Black” which was released in 2009. This book has inclded his struggles and about becoming a member in playing Saturday Night Live. He has got many tattoos on his body including a happy and sad face, peace sign, a friend name who was murdered and the cross having name of his sons and his wife.

He is a tall guy with the height of 5 feet and 8 ½ inch. He was married with his school girlfriend Sabina in 1985. The couple has three sons. After 23 years of marriage, they got divorce in 2009. Occurance of divorce does not deteriorate the relationship of his kids with their mother as well as to him. He said that his children have encouraged him to leave alcoholism. In 2011, there has been gossip that Morgan has been dating Megan Wollover. They proved it right as they got engaged in September of same year. Their first child, Maven Sonae was born in July of 2013.

Because of his stand-up comedy, he is very popular among the people of all age group. He has done many shows as well as tours which have also helped to increase his popularity. Because of his outstanding performances, he has been nominated for Outstanding Supporting Actor for three years continuously from 2007 to 2009. He has also worked in many movies such as “Half Baked”, “Head of State”, “g-Force”, “First Sunday”, “Nailed”, “Deep in the Valley”. He has lately done the voice role in Rio 2 in the role of Luiz and in The Boxtrolls as Mr. Gristle.

He has the net worth of $18 million. He has accumulated this sum mainly from his acting and comedy. This has also made him one of the richest comedians in the world. Though he is very popular among people, he is also involved in many controversies. He was diagnosed with diabetes in 1996. In 2010, he has the kidney transplant. There has been rumor that he is very ill and can be dead in any moment. He has also collapsed in the building where Sundance Film Festival was being organized. He has also involved in many legal trouble. They are mainly alcoholism and road accidents. Because of these reasons, we can see him on television from time to time as well.

To get more information about Morgan, you can visit wiki and other internet sources. You can also follow him in twitter. His videos are popular in YouTube. So, you can visit to YouTube as well to view his funny acts.